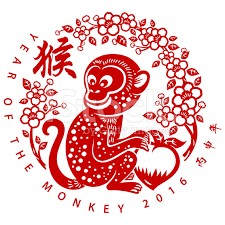 Happy New Year!  Today is the first day of the Chinese Year of the Monkey. Just like the Western zodiac, the Chinese zodiac is based on a 12-part cycle, but each year has specific attributes associated with a specific animal rather than each month. People born in the year of the Monkey years are intelligent, curious and playful, just like their namesake. The flip side is that the Monkey can also be tricky, opportunistic, and not trustworthy.

The year of the Monkey will be volatile and unpredictable, but generally optimistic. Your own luck for the upcoming year will depend on your sign. According to Astrology Club, it will be a “generally auspicious year for Rats, Oxen, Dragons, Horses, Monkeys, Roosters and Dogs. This could be a difficult year for Tigers, Snakes, Dogs and Boars. Rabbits should beware their finances. Sheep should take care of their health.” Above all, people who think on their feet and remain flexible will prosper during the Year of the Monkey. Individualism will be rewarded!

In this spirit, here are some titles that should inspire your fast-thinking and independent spirit. 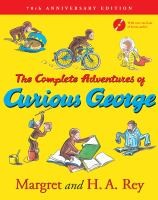 Let’s get the obvious recommendation out of the way: Curious George, everyone’s favourite mischievous monkey. Originally created by Margret and Hans Rey, the Curious George character is now at the center of a franchise which now encompasses movies, TV shows, and many book series. The original seven stories written and illustrated by the Reys are included in The Complete Adventures of Curious George.

The Monkey is definitely the trickster of all the animals of the Chinese zodiac: he’s clever and witty but you can never quite trust him. My favourite literary trickster of all time is Coyote from Green grass, running water by Thomas King. Not only is Coyote clever, but he just may have created the world. Or did he? Green Grass Running Water is an unconventional read filled with sly references to colonial history, and an engaging narrative with a lot of colourful characters. The occasional narration by Coyote keeps you wondering if you understand what is *really* going on.

Non-fiction fans might like reading some true crime titles in honour of the Monkey.  Bringing down the house : the inside story of six MIT students who took Vegas for millions by Ben Mezrich is action packed and contains many unexpected twists. “Bringing Down the House is an action-filled caper carried out by the unlikeliest of cons — supersmart geeks. A highly elite group of mathletes was recruited to join The Club, a small, secret blackjack organization dedicated to counting cards and beating the major casinos across the nation at their own game. As a successful ring of card savants, backed by a mysterious ringleader and shadowy investors, they infiltrated Vegas and won millions.” Publisher.

If you’re a history fan, you’ll likely enjoy Empire of deception : the incredible story of a master swindler who seduced a city and captivated the nation by Dean Jobb.”A rip-roaring tale of greed, financial corruption, dirty politics, over-the-top and under-the-radar deceit, illicit sex, and a brilliant and wildly charming con man on the town and then on the lam, Empire of Deception has it all. It’s not only a rich and detailed account of a man and an era; it’s a fascinating look at the methods of swindlers throughout history. Leo Koretz was the Bernie Madoff of his day, and Dean Jobb shows us that the American dream of easy wealth is timeless.” Publisher.

Of course, if you’re one of the animal signs that is facing a challenging year, you might want to step away from the drama and focus on mindfulness. Tigers, Snakes, Dogs and Boars, Rabbits and Sheep – this book’s for you! Taming the drunken monkey : the path to mindfulness, meditation, and increased concentration by William L. Mikulas, PhD. “Drawing from Western and Eastern psychology, health systems, and wisdom traditions, this book provides instruction for developing and improving three basic behaviors of the mind: concentration, awareness, and flexibility.” Publisher.

Literary Horoscopes - Welcome to the Year of the Monkey!
https://haligonia.ca/literary-horoscopes-welcome-to-the-year-of-the-monkey-130109/