I was very late going to Sally this month. I wanted the new Finger Paints at the end of April while the B2G1F sale was still on, but my Sally didn’t want to put them out until May 1. Then I had to wait for my 15% off coupon (as I sure spent enough last month to qualify for one) which was sent to me late, so I didn’t go until last Sunday. 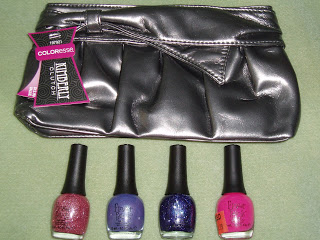 The display was missing a few shades, so I skimmed through quickly and picked these 3.

From L-R: Finger Paints Hue Left a Message?, Hue Rang? and Easel-y Entertained (CAD4.99 each, before the 15% discount). And with that, I was supposed to get a summery colourful clutch as GWP but they were all out of it, so sad. They gave me this Kimberly clutch that was the promo clutch for Coloresse purchases.

The very last bottle on the right is Pink Crayon from the discounted bunch. Sally in the US had some Finger Paints on clearance for $1.99, but in Canada, they were CAD2.79.

So the rule of thumb with Sally is to go there as soon as you can at the beginning of the month. Stock would be the best then, and any GWP promos like this one with Finger Paints would still be available.