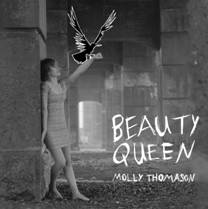 Molly Thomason CD Release Beauty Queen: Release party LIVE on Haligonia.ca! Click through to watch Friday, May 27th at 8pm.
New album released May 31 by 16-year-old Antigonish singer-songwriter
Hooks.  That is what Molly Thomason is about and nowhere is that more evident than on her new recording, Beauty Queen.  From Molly’s signature vocal style to her clever lyrics to the music itself, Beauty Queen delivers.
Produced by award winning Dale Murray (Christina Martin’s I Can Too) at Codapop in Halifax, Beauty Queen marks the sophomore release by 16 year old Molly Thomason.  Her debut recording, “Through The Static”, was a solid effort by a talented young singer-songwriter but it is on her second recording that Molly really starts stretching her creative muscles.
Not afraid to experiment with different styles and influences, the young Thomason has a vision for each of her songs and she works diligently to realize their individual sound without regard to the boundaries of genres.  The result is a record with an undeniable pop sensibility that showcases a variety of musical styles and instrumentation – from the doo wop of “Shine In the Dark” to the jazz tinged “Amsterdam”.  The songs themselves are intelligent and perceptive, often showing a maturity that belies her years.
The refreshingly direct and well grounded Thomason quickly dispels any notion that she is dealing with anything other than the life of a 16 year old.  “Every song reflects some event, some relationship, some part of what’s been happening in my life and my friends’ lives over the last two years  – figuring out who we are and who we want to be, and the big gap that is sometimes in between.”
Through the Static garnered a lot of attention for Molly including two Music Nova Scotia nominations (New Artist & Pop/Rock Recording), a placement on Degrassi and two #1’s on the east coast countdown.  Molly’s songs “Little Bones” and “People Lie” achieved semi-finalist status in the International Songwriting Contest in 2010 and 2011.
Molly tours at every opportunity.  A confident and engaging performer, she captures and holds the attention of her audiences, whether she is appearing in theatres, on festival stages or at high schools.  She will first celebrate the release of “Beauty Queen” at home in Antigonish with a concert on May 27 at Dennis Hall in the Coady Centre.  Dale Murray, Christina Martin, Breagh MacKinnon, Ruth Minnikin, Mo Kenney, Carleton Stone (a favourite co-writer), and the Blue Engine String Quartet will all be joining her for a concert that will be streamed on www.haligonia.ca.
Tickets are $20, $10 for Students, and available at the Five Cents to a Dollar in Antigonish and at the door on the night, or by calling 867 1293.
Upcoming shows include the Cavendish Beach Festival, Stanfest and Evolve .  Additional tour dates available at www.mollythomason.ca.