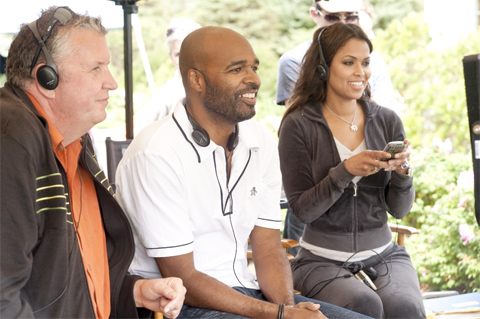 Using a location in Blue Rocks to substitute for Martha's Vineyard, the $6.5-million production was shot last summer and employed almost 350 people in Nova Scotia.

"I'm really proud of this project," said Mr. Mahoney. "It was hard-fought to bring it to Nova Scotia. We competed against South Carolina, Victoria, Massachusetts, and with our dollar on par, it came down to our ability to offer better resources and a tax credit that works."

Nova Scotia attracts about $50-million in foreign productions annually. For every dollar the Film Industry Tax Credit refunds on Nova Scotia labour for foreign productions, an additional $4 is spent in Nova Scotia. Not only is the tax credit one of the most competitive in the industry, Nova Scotia's skilled crews, talented actors, unique locations and infrastructure makes it an attractive filming location.

"I came to Nova Scotia not knowing what to expect and left eager to find my way back here for another project," said Mr. Akil. "I have been singing the praises of Nova Scotia to anyone who will listen."

Nova Scotia's audiovisual industry employs almost 3,000 and contributes about $100-million to the economy annually. Nova Scotia is among the largest production centres in Canada.

"We were delighted that the Jumping the Broom team selected Nova Scotia as their filming destination," said Ann MacKenzie, president and CEO of Film Nova Scotia. "Nova Scotia has a diverse landscape that can fill in for anywhere, top-tier talent, and we pride ourselves on or ability to accommodate large productions."

To view the Jumping the Broom trailer, visit www.jumpingthebroom-movie.com .

Film Nova Scotia is a provincial Crown corporation reporting to the Minister of Economic and Rural Development and Tourism. The corporation provides programs and services to support the province's audiovisual industry.