L-A: We got an assignment from Stylelist Canada about what we’d pack in our beach bags for the long weekend. I have no idea where to find a beach around these parts and I have no plans other than buying a lot of strawberries and thinking about making jam, drinking gin on the back deck, and maybe a day trip to The Bruce Peninsula (because I find it hilarious that there’s a peninsula named Bruce).

Let’s call it staycation weekend. And this is what’s in my bag (minus a notebook and about five different pens. I edited so I appear a bit more like some glamourous lady) – either for exploring or hanging out on my deck and watching the bees.

So here’s what’s in the bag (which is probably why I always carry a large bag): 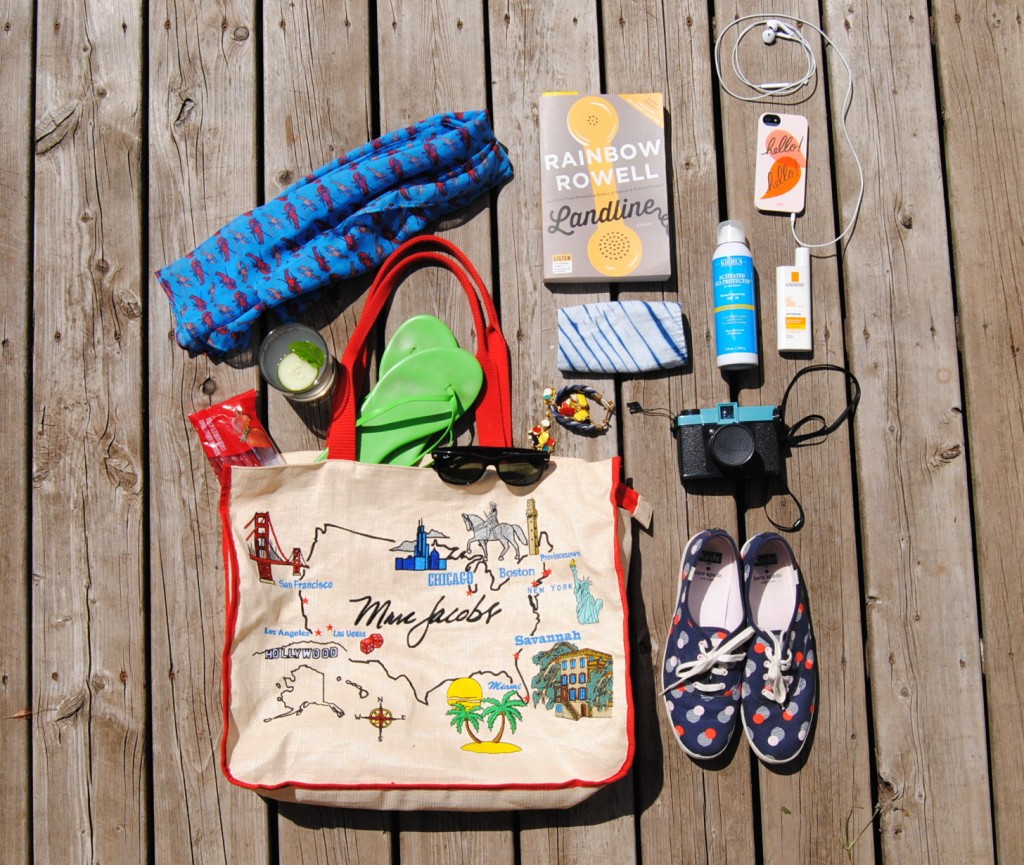 The bag: purchased at Marc by Marc Jacobs a few years ago and my husband really really hates it. It’s a bit too America! for Canada Day, but whatevs. Love it. Illustrated maps are my jam. One day I’ll take it on a road trip in America.

The shoes: two pairs. The April 25th of Shoes (Kate Spade Keds) for more walking and Tkees flip flops. The flops are cute and I love the colour, but I’m not entirely certain they’re worth $50 a pair (I didn’t pay that much, but you know, still).

The scarf and hanky: J.Crew lobster scarf is one of my new favourite things. I’ve used it as scarf and in my hair. The hanky – because pollen (I’m not going to pretend I don’t get summer sniffles for glamour’s sake) – is by Bespoke Uprising Textile Studios (she makes the nicest stuff).

Sunglasses: the Coachella Ray-Bans. Finding those at Coachella still makes me giddy.

Accessories: Breaking out the super nautical Kiel James Patrick rope bracelet for summer and adding a super colourful Kate Spade necklace to the mix. New phone case is Rifle Paper Co and adorable. Plus headphones because I never go strolling without them. Lomo Diana camera so I can maintain some kind of hipster adjacentness. I use it to take really fuzzy, double exposed photos. I like to say they’re artsy, others would disagree and say I’m wasting money on developing film.

Sunscreen: Yes, two kinds. The perils of being super pale. SPF 60 for the face, Kiehl’s SPF 50 (which I spray everywhere, like all over the patio table).

Reads: New Rainbow Rowell!! This one is for grown ups, not YA (although, whatever. YA should read what they like). This one is coming out soon (make friends with librarians, kids! They can hook you up!) and if it’s half as good as Fangirl or Attachments, I’m going to be hooked.

Eats: it’s summer y’all and you know what that means: gin, lemonade, mint and twizzlers. Just the good stuff.