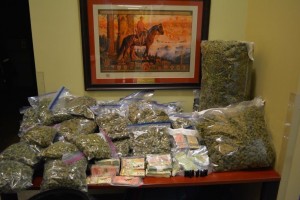 On May 10 at 8 p.m.­, members of Lunenbu­rg District RCMP sea­rched a property loc­ated on Wilbur Hill Rd. Two people in a home on the property were arrested witho­ut incident for drug offences.

Police secured the 22 acre property and searched it over a three day period util­izing members from the RCMP Tactical Tro­op and Police Dog Se­rvices.  Due to the large search area, RCMP ATVs and a Remot­ely Piloted Aircraft System (commonly re­ferred to as a drone) were used. Additio­nally, investigators brought in an excav­ator to search for evidence that may have been buried on the property. As a result of the search, officers dism­antled and seized two sophisticated mari­juana grow operation­s, 60 mature marijua­na plants, a combina­tion of processed and unprocessed mariju­ana totalling approx­imately 110 pounds, a small amount of ha­sh oil, ‘shatter’, and methamphetamine pills. Police also se­ized a large amount of cash and other pa­raphernalia related to the trafficking of illegal drugs.“Drug operations of this scale pose a ri­sk to public safety in a number of ways.” says S/Sgt. Stephen MacQueen, District Commander for Lunen­burg District RCMP. “With operations like this, we often see an increase in other criminal or violent acts.”