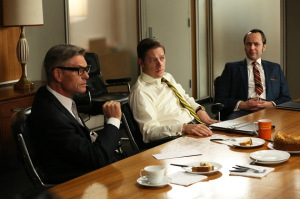 Last night’s Mad Men episode contained many memorable moments and great conversations, but it was also hectic and I found a few lines a bit jarring. I’m still not sure exactly what to make of it, or even how much I liked it.

If you’ve seen “A Tale of Two Cities”, click through to discuss it with me.

I want to start with Peggy and Joan, because their storyline was my favorite part of the episode. I’ve always adored the dynamic between these two strong women. They’ve achieved different things, in very different ways, but they’re both trailblazers in the advertising world. Peggy rose to the top on talent, and deserves every success she’s had. Joan has had to make questionable sacrifices, but she has worked hard and everyone knows the company can’t function without her. That has long been established.

Since the company d 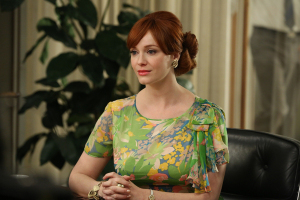 itched Jaguar and doubled in size, Joan has felt less important than when she was first made a partner. She saw an opportunity to change that when, thanks to her friend who recently visited, she ended up at a business dinner with the head of marketing for Avon. I adored when she excitedly told Peggy “I thought it was a date – it was better!”

Landing Avon for the company would be huge for Joan, but she knew she had to make the most of the connection to move into more of an accounts role. But while Joan does have experience in that kind of hand-holding, pandering work, she has never had to run a meeting before like she needed to when introducing him to Peggy. Joan made a bold move in keeping Pete out of the meeting when he’d specifically been assigned the job, but she was clearly doing what she thought she had to do to get her foot back in the door. The dinner was awkward. She interrupted Peggy when she shouldn’t have, didn’t know how to answer questions and was a little too stiff. Peggy was furious, but I was glad she still had Joan’s back later at the office. I hope they still land the client. 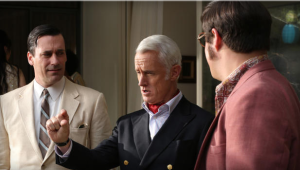 Unlike some fans, episodes in California have never been my favorite. I know it’s important to depict the changing tides of the era – L.A. was becoming more and more vital to businesses as TV advertising picked up. But sometimes the depictions feel a bit too cartoonish and cliched to me, and this episode crossed that like a little.

That said, Don and Roger at the hippie party wasn’t short on comedy. Roger was full of barbs when they ran into Danny (the short guy, also known as Paris’s boyfriend from Gilmore Girls), but the short guy punched him out. Roger left the state declaring that New York “is still the center of the universe”, but you know how out of touch Don and Roger must feel at a party like that.

Don smoked hash, hallucinated Megan as a blissful hippie and Dinkins, but had actually passed out in the pool. (A callback to the last time Don passed out in California, when he hit his head and was told to aim for the pool. I thought it was poor advice then, and it was. He could have drowned had Roger not pulled him out.)

The backdrop to all of this was the Democratic convention and subsequent police brutality in Chicago. There was a lot of politics talk in this episode, and I particularly liked Megan and Don’s quiet, sad phone call. It seemed like they were temporarily reconnecting, even though their reactions to what was happening on TV differed – Megan talked about how getting your head smashed in by a cop would ruin your life, and Don responded that the protesters were throwing rocks.

Why are you always down here?

There’s chaos and change in the United States, and chaos and change at the agency – now officially known as “Sterling Cooper and Partners”, or SC&P. I’m liking Harry Hamlin on the show, and watching Jim trying and manage the SCDP personalities was a kick. Bob Benson saw some upward movement, even though it seems to mostly be because Jim doesn’t like him. We’re seeing Ginsberg kind of circling the drain. I’m curious about what’s going on with him. Mental health issues? Anxiety? Or is this just his personality?

And Pete, well, he basically threw his hands up in the air in frustration. The office is a mess, and he no longer understands where he fits into the equation. He told a joint from Stan in the creative lounge and got high.

It was a busy episode and I’m sure I’ve left things out, so please jump into the comments and give me your two cents! How did you feel about the episode?