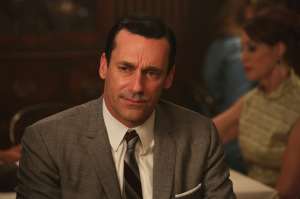 Wow. Not only was last night’s episode of Mad Men my favorite of the season, but I believe I’ll remember it one day as one of the more memorable of the series overall.

I’m a big fan of Sally Draper, and her relationships with each of her parents has always been one of the more compelling aspects of the show.

There’s so much to talk about when it comes to this episode, but I’ll start with Don and Sally.

Sally Draper has never had it easy. Her mom is Betty – cold, manipulative, jealous and often childish. Her dad is Don – distant, dishonest, both self-loathing and egotistical, and also often childish. And through it all, in her eyes, Don was often the hero and Betty the villain. But after what happened this week, it seems like poor Sally is completely alone now. Both her parents are rotten.

Jon Hamm was fantastic in this episode. The scene right after Sally caught him and Sylvia having sex was, I think, some of his best work. We’ve never seen Don that lost and terrified before. He had no idea what to do or say. Later, he fed Sally a pathetic excuse. Instead of admitting his shortcomings and treating her like an adult, he pretended she’s still a child that would believe such a weak lie. Sally was too fed up with him to protest. She

I think it hurt Sally more to see her father cheating on Megan than it would have to see him cheat on Betty. Sally knew that marriage was bad, and she blamed most of it on her mother. But Sally likes Megan, and this marriage was supposed to be true love. But now she knows who Don really is.

I liked how the episode framed that realization among other themes of parents and children. Pete and his mother hate one another, yet are obligated to care about each other because they’re family. And then there was the Rosens and their son.

Don was willing to go to extremes to help the Rosen’s son avoid going to Vietnam, even though his political beliefs aren’t as strong as Megan’s. Why? Because it’s Sylvia’s son, and losing him makes her sad. Don treated the situation like it was his own kid, even yelling at Ted “You’d do it if it were your son!” after almost ruining a client dinner with war talk. Don would put everything on the line not for that boy, but for his lover. He would do much more than he ever did for his wives or children.

If there was a part of the episode that was disappointing, it was the Bob Benson and Pete Campbell scene. Pete was furious with Bob because he thought the nurse Bob had recommended was having an affair with his mother. And when Bob tried to suggest that Mrs. Campbell may not be Manolo’s “type”, Pete called Manolo a “degenerate” and was even more disgusted – that meant he was capable of anything.

What we know of Bob so far is that he’s very polite and careful, and a corporate ladder climber. He’s always got the right thing to say. I don’t think he’d be stupid enough to try and hit on Pete, even in such a sweet way, right after hearing Pete call another man a degenerate for possibly being gay. I don’t believe that Bob Benson would risk his entire career for Pete Campbell, not in that moment anyway.

Before this episode, all we knew of Bob Benson was that he wasn’t to be trusted. He said his father was dead to one person, and sung the praises of the nurse who brought him back to health to another. The whole Internet has been coming up with crazy conspiracy theories about who he is and what he’s all about, and I don’t think it’s as simple as “gay and in the closet.” That doesn’t explain the lying.

Another highlight of the episode was the scene between Peggy and Pete – and, for that matter, every Peggy scene this week. But those characters have so much history, and they have each evolved very individually and in very different ways. Pete is feeling lower than ever, and Peggy is on the rise. “At least one of us ended up important,” was Pete’s way of both congratulating her and pitying himself.

It was fun to watch the two characters drunkenly laugh together after so many years, and also interesting to watch a sober Ted watch them. Things aren’t all peachy-keen for Ted at home – his wife believes he loves work more than his family, and she’s probably right – but I don’t know whether anything will happen with him and Peggy. I don’t want Peggy to be the other woman.

Peggy and the rat in her apartment, and the phone call she placed to Stan, was probably the funniest part of the episode. Just fantastic.