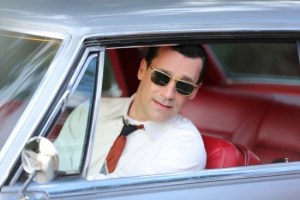 Last week, I didn’t love Mad Men. It felt like it was trying too hard to achieve something confusing. This week, everything was spelled out and perhaps a tad heavy-handed. But the storytelling, the character development, and the way the interpersonal relationships were on display all worked perfectly.

I very much enjoyed the episode. If you’ve seen it, click on through.

This episode relied a lot on the ideas of twins or doppelgangers, replacements, backup plans. Peggy had Don as a mentor, and she replaced him with Ted. Don had Betty as a wife, and replaced her with Megan. But neither of those replacements are working out as planned. Joan has replaced Greg with Bob, but we’re beginning to see that he might not be the sweet guy he pretends to be. 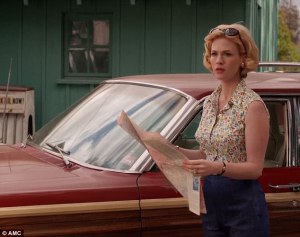 I loved Betty in this episode, and seeing the more confident, calm woman she’s become. Some time has passed, and she’s thin again. When Don pulled into the gas station and she was leaning into the car, it easily could have been a flashback. We saw how uncomfortable Henry is with the idea of men hitting on his wife, the same way he hit on Betty back when she was with Don.

Betty understands Don now, better than anyone. She understands how much better off she is now, but she also knows what they had. She let herself have one more night with him, while they were visiting Bobby at camp, and knew it would go no further. She doesn’t need to know anything about Don’s marriage with Megan to know that it’s struggling, and to know why.

Don doesn’t have Betty, and he doesn’t have Sylvia. And he doesn’t want Megan, but out of lack of any other option, he returned home to try and make it work with her. How much longer will they pretend the relationship can be saved?

I don’t love any of the storylines to do with Megan and her job, but I did get quite a few laughs out of Arlene hitting on her, and misreading signal after signal. 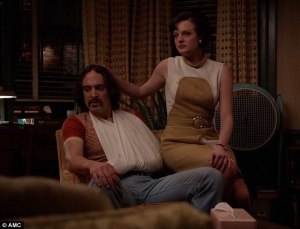 Oh man, did I ever laugh when Peggy stabbed Abe with her makeshift bayonet. I love Peggy, and it’s interesting to watch her try and keep her head above water when she was so recently on top of the world. She bought an apartment she hates. Her boyfriend dumped her, in a pretty humiliating and hurtful way. She has feelings for her boss and knows he loves her, but he won’t acknowledge it. She’s trapped between Don and Ted, two men she thought were more different than they actually are.

Peggy tried to be the bohemian, liberal-minded girlfriend that Abe wanted. I think she wanted to be that person. But ultimately, they were too different. Abe got stabbed on the street, and Peggy couldn’t understand why he wouldn’t try and identify the culprit or why he was so outraged that the cop assumed the criminal was a minority. Abe couldn’t understand why Peggy couldn’t be happy in the neighborhood, and her fear wasn’t something he could get over. Still, it would be hard to come up with harsher words than what he told her in the ambulance. “Your activities are offensive to my every waking moment; I’m sorry, but you’ll always be the enemy,” is quite the breakup line.

Joan and Bob, and Roger and Pete

I adore Joan, so I wish that I could be happy that she was dating Bob Benson. At first, I was happy, even though I remember Ken calling him a sociopath in the first episode of the season. I actually didn’t remember and had to read online today, that earlier this season Bob told someone his father is dead. Then, he gave Pete Campbell the name of the nurse who brought his father back to health. He’s a liar and a manipulator, not just a guy who’s learned to use his natural charm and kindness to his advantage. 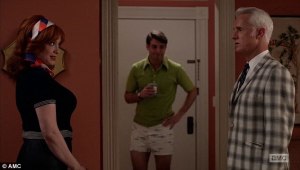 Still, it’s understandable why Joan would rather go to the beach with Bob and his short shorts rather than allow Roger to momentarily play the role of father. She knows she can’t rely on Roger, and that an absent, overseas war hero is a better role model for Kevin than Roger – even if she knows what a jerk Greg really is.

Roger tried to emulate Don when he spent a day with his grandson, and misjudged both the age difference between his grandson and Don’s son, and what kind of father Don is. He took a four year-old to see Planet of the Apes, and had nightmares. Roger’s daughter forbade him from spending unsupervised time with the kid, but the decision really had more to do with her own fraught relationship with her father than the actual movie. Roger has half-assed all of his relationships, and even when he reached out to Kevin it was only because he’d been rejected somewhere else. It doesn’t feel impossible that he could be a good dad or grandfather, but he isn’t willing t put in the work.

It was interesting to watch Bob interact with Pete, because it’s as though he’s naturally the smooth guy that Pete tries so desperately to be. Helping him out with the situation with Pete’s mother was such a power play, I loved it.

Also, I loved seeing Duck as a headhunter. That stuff about the importance of family was crap, right? I mean, WHAT ABOUT CHAUNCEY THE DOG???