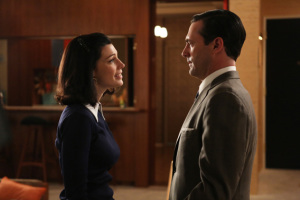 Sitting down to write my Mad Men recap is both daunting and one of my favorite parts of the week. I finish each episode brimming with ideas, dying to talk to everyone about what just happened.

But the realization that I have to organize those thoughts into a coherent essay can sometimes be overwhelming.

Last night’s season six finale of Mad Men certainly left me with a lot to think about. I want to watch the episode a second time, so I can really think about all that happened, and the similarities and differences among the characters.

At the beginning of the episode, SC&P (that’s the agency now, right?) was preparing to send one employee to live in California, to set up a small satellite office for Sunkist. For a partner, it would be a massive step down. But for Stan, it was an opportunity. The chance, he told Don, to take a single desk and built it into a company.

Stan’s words resonated with Don, and the man who stole his entire identity then stole Stan’s industrious spirit as well. He told the partners that he wanted to go to California. It was a classic Don Draper move. His life is in a shambles – he’s been spiraling out of control for a long time, he deeply disappointed his beloved daughter, he got thrown in jail for punching a minister in a bar. Don can’t (or won’t?) change who he is, so he’ll change where he is. Like he did in divorcing Betty, in marrying Megan. His idea that he and Megan would be happy living in California because that one time, on vacation, they were happy there, was very childish. It was very Don.

Meanwhile, Ted made a very Don mistake. He was stuck in a  flirtatious tug-of-war with Peggy. He brought his wife to the office, so she made a show of leaving for a date dressed to the nines. He showed up to her apartment, vowed to leave his wife, and slept with her.

It was a move that Don would make, and Ted’s resulting desperation to move to California for a fresh start was also very Draper-esque. But there was a key difference. When Don asked “with Peggy?” (in fact, he didn’t even ask, he assumed) as Ted begged for the chance to start over in California, Ted said no. He needed the fresh start with his family, and that meant getting away from Peggy.

Ted told Don that without his family to ground him, he’d be lost, floating in the crazy world. I felt that spelled things out a bit too clearly, laid them on a little too thick. The parallel was clear enough on its own. Don has spiraled down and down until he’s lost everything. His wife, his children, his second wife, and later in the episode, his job. What Ted did to Peggy was disgusting, but Ted managed to hold onto his family and Don didn’t.

California is also a clean slate for Pete. Man, there were some good Pete Campbell moments in this episode. The storyline itself was a little far-fetched, but I don’t really care. Manolo and Mrs. Campbell married onboard a cruise ship, and later Mrs. Campbell was likely pushed overboard. Maybe she fell, but her sons will never know – they were too cheap to pay for a full investigation.

Of course, Pete was most furious with Bob Benson. All day at work, I giggled every time I heard Pete Campbell say “NOT GREAT, BOB!” in my head. Any progress Pete made last week, when he chose to leave Bob alone rather than risk his career trying to take him down, was gone. He told Bob “I will never, ever let this go.” Bob has put too much work into his career to let Pete Campbell destroy it, so he maneuvered a situation that revealed Pete’s weakness to the Chevrolet execs: the kid can’t drive. (Yeah, he got his license last year – but he couldn’t drive a stick.) Pete had an embarrassing accident, and that was it.

Pete no longer has parents. He no longer has a wife. He’ll barely have a relationship with his daughter, whether he remains in New York or not. California was a life preserver for Pete -a chance to get away from his personal problems, his professional problems, and that damn Bob Benson. Trudy knew what opportunity Pete had before he himself did. He has nothing, but is free of everything.

“I was an orphan. I grew up in Pennsylvania. In a whorehouse.”

The most intense scene from the episode was when Don revealed his childhood story to the Hershey executives, but it meant more as a culmination than it did as an individual scene.

Don has lost everything, he has quit drinking cold turkey, he is at his most vulnerable. Slowly, all season long, the divide he’d created between who he was and who he pretends to be has been falling apart. Dick Whitman has a very emotional connection to Hershey. Don Draper couldn’t hold it together any longer.

Hershey would have been a very, very big client, but blowing that meeting is not the reason Don was forced out of SC&P. That’s been building all season long. He hastily dumped Jaguar, and everyone knew that it wasn’t because they were getting Chevy. He made the decision to merge with another company and then went to war with someone who should have been his closest colleague. The partners gathering on Thanksgiving morning to tell Don that he would take a mandatory, indefinite leave of absence… that was a long time coming. (And it was foreshadowed in the name Draper being removed from the name of the agency. Sterling Cooper Draper Pryce became SC&P. Does Draper even exist as a man anymore? Barely. Whitman is taking over.) 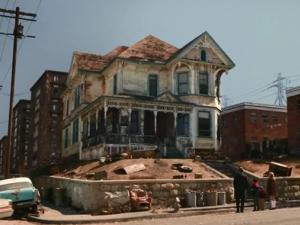 Some of my favorite scenes from the episode had to do with Don and his old family. His phone call with Betty. She blamed their broken marriage for Sally’s misbehavior at boarding school, but Don knew he shouldered almost all of that. His phone call with Sally was heartbreaking. And finally, he takes his children to see where he grew up. The moment only revealed that his children now know he grew up in poverty. Who knows how much more he’ll tell them?

I have less to say about Megan. The writers were never able to make her more than a facet of Don’s life, whereas Betty really developed into a character of her own. I would be fine if this episode was the last we saw of Megan, because it would feel the most realistic. Megan fell in love with the dashing Don Draper, and slowly began to see the twisted mess of Dick Whitman that lay beneath the surface. As she said, they have no children. Nothing holds Megan back from moving to California and continuing her acting career.

Those are words that Peggy uttered to Ted, and I think they so sum up the progression of her character. Peggy has changed in so many ways since she first joined Sterling Cooper as a secretary. She’s practically unrecognizable. Yet, some things have not changed. She caved with Ted, she had another affair with a married man. And it ended just as badly.

Elisabeth Moss’s delivery of the line “Well, aren’t you lucky. To have decisions,” chilled me to the bone. It was perfectly executed, and summed up her character’s life this season. She has had such little choice in everything. Peggy made a big move in leaving the agency last year, and yet she ended up right back under Don Draper, with no say in the matter. Her boyfriend convinced her to move to an apartment she hated and then he dumped her. She fell in love with her boss, slept with him on the promise that he’d leave his wife with as little scandal as possible, and he betrayed her. 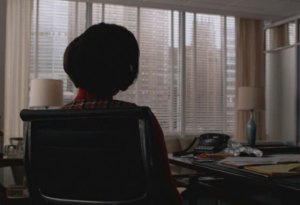 Yet, Peggy will be fine. The back-of-the-head shot in Don’s office said so much. She is, essentially, creative director of a large agency now – Don’s on leave and Ted’s in California. She might still make mistakes, but Peggy is doing well. I wonder if Dawn will be her secretary now?

In many ways, I thought this episode could have served as a very dark series finale. As I said above, many of the characters have lost everything but still regain hope. Why should we believe Don will change, when he never has before? Maybe he won’t. But I’ll be watching next season to find out where everyone has ended up.

Mad Men – “Well aren’t you lucky. To have decisions.”
https://haligonia.ca/mad-men-well-arent-you-lucky-to-have-decisions-79025/