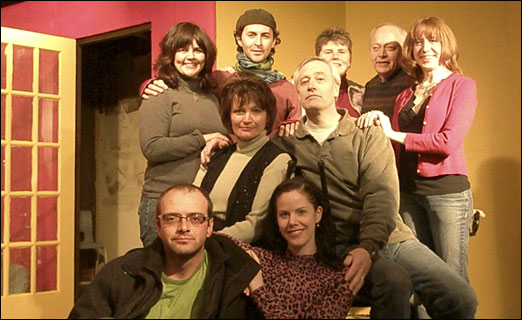 The cast of "Maggie's Getting Married".

There was lots of laughter from the audience inside the All Saints Church Hall.

Thursday evening was the opening night for Maggie’s Getting Married, a touching romantic comedy by Norm Foster.

Directed by Stacey Fownes, Maggie’s Getting Married takes the audience to the night before Maggie’s wedding. The bride’s family, the Duncans, host the dress rehearsal party.

The whole play takes place in the kitchen, as the six actors walk in and out, interacting and discovering things about each other.

It is easy for the audience to relate to every character in the play, to the flaws and weaknesses of the actors, but also to the good qualities of each.

It is this, and the professional and experienced staff, that makes this play a great success.

Maggie’s older sister Wanda is played by Jill Curley. She plays the role of the very experienced older sister.

Bonnie Matthews plays the part of Cass Duncan, the no-nonsense mother preparing for her daughter’s wedding.

Michael Taylor is Tom Duncan, the father who is experiencing a mid-life crisis and has a fear of dying young.

Wanda’s latest of many boyfriends is played by Rafael Ziah Franco. Axel Wilkie is an actor who has the fear of women in him.

And last but not least is Russell Macmillan, played by Curtis Skinner. He plays the part of the groom. He is a real estate agent who tries too hard to make people like him.

There was not one empty seat in the house. The two hours flew by as everyone was captivated by the actors on the stage.

A definite must-see, deserving of a standing ovation!

For reservations call 832-3300 or visit www.bedfordplayers.ns.ca

“Maggie’s Getting Married” a hit!
https://haligonia.ca/maggies-getting-married-a-hit-1620/