The Man Booker Prize recognizes the best in fiction writing by a citizen of the United Kingdom, the Republic of Ireland or the Commonwealth countries and its purpose is “to encourage the widest possible readership for the best in literary fiction”.

A Brief History of Seven Killings by Marlon James

“From the acclaimed writer of “The Book of Night Women” comes a masterful novel framed as a fictional oral history that explores the events and characters surrounding the attempted assassination of Bob Marley during the political turmoil on Jamaica in the late 1970s.” publisher. 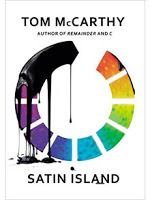 “Meet U. — a talented and uneasy figure currently pimping his skills to an elite consultancy in contemporary London. His employers advise everyone from big businesses to governments, and, to this end, expect their ‘corporate anthropologist’ to help decode and manipulate the world around them — all the more so now that a giant, epoch-defining project is in the offing. Instead, U. spends his days procrastinating, meandering through endless buffer-zones of information and becoming obsessed by the images with which the world bombards him on a daily basis: oil spills, African traffic jams, roller-blade processions, zombie parades. Is there, U. wonders, a secret logic holding all these images together — a codex that, once cracked, will unlock the master-meaning of our age? Might it have something to do with South Pacific Cargo Cults, or the dead parachutists in the news? Perhaps; perhaps not.  As U. oscillates between the visionary and the vague, brilliance and bullshit, Satin Island emerges, an impassioned and exquisite novel for our disjointed times.” publisher

The Fishermen by Chigozie Obioma

“Told from the point of view of nine-year-old Benjamin, the youngest of four brothers, The Fishermen is the Cain and Abel-esque story of an unforgettable childhood in 1990s Nigeria. When their father has to travel to a distant city for work, the brothers take advantage of his extended absence to skip school and go fishing. At the forbidden nearby river, they encounter a madman who predicts that one of the brothers will kill another.” discover

A Spool of Blue Thread by Anne Tyler

“It was a beautiful, breezy, yellow-and-green afternoon.” This is the way Abby Whitshank always begins the story of how she fell in love with Red that day in July 1959. The whole family–their two daughters and two sons, their grandchildren, even their faithful old dog–is on the porch, listening contentedly as Abby tells the tale they have heard so many times before. And yet this gathering is different too: Abby and Red are growing older, and decisions must be made about how best to look after them, and the fate of the house so lovingly built by Red’s father. Brimming with the luminous insight, humor, and compassion that are Anne Tyler’s hallmarks, this capacious novel takes us across three generations of the Whitshanks, their shared stories and long-held secrets, all the unguarded and richly lived moments that combine to define who and what they are as a family.” publisher

A Little Life by Hanya Yanagihara

“When four classmates from a small Massachusetts college move to New York to make their way, they’re broke, adrift, and buoyed only by their friendship and ambition. There is kind, handsome Willem, an aspiring actor; JB, a quick-witted, sometimes cruel Brooklyn-born painter seeking entry to the art world; Malcolm, a frustrated architect at a prominent firm; and withdrawn, brilliant, enigmatic Jude, who serves as their center of gravity. Over the decades, their relationships deepen and darken, tinged by addiction, success, and pride. Yet their greatest challenge, each comes to realize, is Jude himself, by midlife a terrifyingly talented litigator yet an increasingly broken man, his mind and body scarred by an unspeakable childhood, and haunted by what he fears is a degree of trauma that he’ll not only be unable to overcome – but that will define his life forever. In rich and resplendent prose, Yanagihara has fashioned a tragic and transcendent hymn to brotherly love, a masterful depiction of heartbreak, and a dark examination of the tyranny of memory and the limits of human endurance.” discover

The Year of the Runaways by Sunjeev Sahota

“Sunjeev Sahota’s second novel makes a nonsense of common assumptions about what it means to write a political novel. . . . The question of the responsibilities borne by the citizens of the more fortunate nations of the world towards those from other countries is at the heart of Narindar’s story, but it is told in the most intimate of ways, as an issue that is not theorised but deeply felt. And the question remains open all the way to the end. . . . Sahota is a writer who knows how to turn a phrase, how to light up a scene, how to make you stay up late at night to learn what happens next. This is a novel that takes on the largest questions and still shines in its smallest details. . . . Through these stories and others, Sahota moves some of the most urgent political questions of the day away from rhetorical posturing and contested statistics into the realm of humanity. The Year of the Runaways is a brilliant and beautiful novel.” The Guardian