Update: The condition of the man pulled from the water in Kearney Lake has improved and is no longer life-threatening. The 21-year-old from East Uniacke was swimming when he went into distress and slipped under the water. A friend he was with and a bystander from shore (not known to him) swam to where he was last seen and were eventually able to locate him and pull him up and to shore, where they commenced CPR and contacted 911.

At 4:35 p.m. Halifax Regional Police responded to Kearney Lake where a swimmer in distress had been pulled from the water by friends. CPR was being performed on the 21-year-old male by his friends when police arrived. Officer’s eventually took over the CPR until the arrival of EHS and the man was transported to hospital where he remains at this time. His condition is believed to be life-threatening. Patrol officers and members of the General Investigative Section are investigating the incident.

(Note: the incident occurred in the small area of the lake near the dam to the right of Larry Uteck Blvd. outbound) 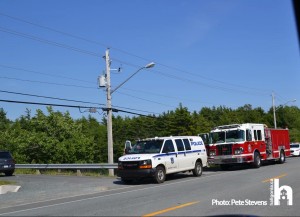