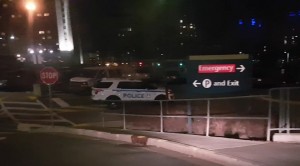 At 7:30 PM, 27 Dec. the Integrated Emergency Service (IES) Centre received a call from a male who advised he was going to harm someone with a knife and wanted to let the police know.

The male had a knife out while confronting Security. A Halifax Regional Police officer was present at the QEII for an unrelated incident and confronted the male. The officer arrested the 20 year old male from Halifax.

The male is held for a medical assessment and will be facing several weapons related charges.

Man with knife arrested at QE2 after threats made
https://haligonia.ca/man-with-knife-arrested-at-qe2-after-threats-made-219827/