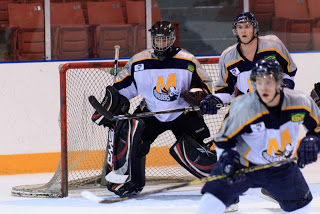 After a red hot start in September which saw them win their first five games and dominate the scoring leader’s category, the Metro Marauders have struggled mightily in October and early November, posting a record of 5-8-2 in their last 15 games.

The Metros hope to get a big confidence boost today with win at the Dartmouth Sportsplex vs. the Meek Division leading Woodstock Slammers.

It won’t be easy. The Slammers are the defending MHL champs and will enter the ‘plex today with a lot of swagger, having 15 of their first 18 games this season.

This Sunday afternoon tilt begins at 1:00 and will be shown on www.live.haligonia.ca! Haligonia Sports’ Bill McLean and Dave Green of TZone Vibration Therapy will have the call from the Sportsplex.

#27 Alex Beaton: The Halifax native is averaging over 2 points a game and has 35 points on the season.
#26 Andrew Langan: The diminutive center has 29 points this season.

Interesting Factoids: The Slammers are ranked 4th in CJHL Top 20 Rankings. They will be without the services of high scoring forward Nick Huard who is out west playing with Canada East at the Junior A Challenge.

Wayne Bedecki and Justin Belanger lead the team in scoring with 23 points each but their production has dropped off considerably. The duo were battling for the league lead through September but are now well outside the top 10…..Dylan King is the team’s leading scoring defenseman with 21 points (19 assists)……Alex Newman leads the MJL in goaltending with a sparkling 2.09 Goals Against Average. Newman has split time with Stefan Dumaresque who has a GAA of 4.04…….The Marauders enter the game in second place in the Bent Division with a record of 10-8-1-1, good for 22 points. The Weeks Crushers are in first with 24 points…..the Marauders website is up and running. Go to www.metromarauders.com. Head Coach Troy Ryan will not be behind the bench today, he is Penticton, B.C. coaching the Canada East Team at the Junior A challenge.

Game time from the Sportsplex is 1:00. Catch all the action on www.live.haligonia.ca!