Ah the irresistible appeal of a warm, buttery baked good. .. Last weekend at the market with my newbie to Hali friend Melanie, we tried crepes from the Creperie Mobile. Yesterday, I thought I’d show her Halifax’s “best” Cinnamon Roll. Mel was pretty skeptical as to the assumption that she was really in store for such a treat, but once I showed her all the “Best of the Coast” awards, well, the writing is literally on the wall.

And so, fortunately, we arrived just as a piping hot batch of rolls were coming out of the oven….It might seen anti-climactic, but I actually don’t have a photo of said culinary wonder. I opted for a pumpkin-poppyseed scone, by far MY personal favorite at Mary’s. The scone is a rich, butty mix of sweet pumpkin and crunchy poppyseeds. Slathered with even more butter, and I am one happy gal!

Mel thoroughly enjoyed her bfast as well. I love introducing people to good stuff and watch their reactions; the eyes brighten up and a slow smile spreads across their faces. It’s what I like to refer to as the “Hell yeah- that’s good” face…we were both wearing those faces this week. 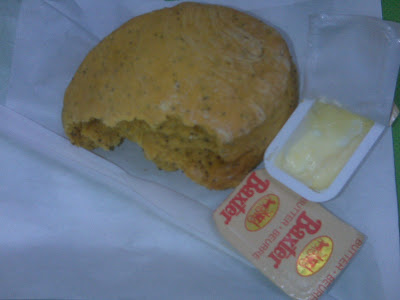