M.C. Beaton is actually a pseudonym for Marion Chesney. Under her M.C. Beaton pen name she writes two contemporary series falling under the “cozy mystery” genre. Her characters are very quirky and unusual. In her own words regarding Agatha Raisin’s personality “I chose to make Agatha into a public relations executive because I wanted to create someone the reader might not like but would want to win through to the end.”

The Agatha Raisin series take place in the Cotswold’s of . The setting is charming, relaxing and yet Agatha seems to be constantly causing friction by her antics and personality.

Lillian Jackson Braun- The Cat Who series takes place in fictional “400 miles north of everywhere” and the main character Qwilleran is like-able from the moment you “meet” him. However, you will find this series to have the same mood of tranquility. The quirkiness in the series comes from Qwill’s cats KoKo and YumYum and his relationship with them while he solves crimes with their indirect help.

Ann Granger’s Markby and Mitchell’s series have a similar flavor since the mysteries also take place in the Cotswold’s of . The 35 year old amateur sleuth named Meridith Mitchell is not teamed with Chief Inspector Alan Markby therefore causing the often humorous conflict between the two while they both solve the same crimes. They also happen to be oddly attracted to each other.

Finally one can not forget the classic mystery writer Agatha Christie with her enigmatic protagonist Miss Marple. Miss Marple, living in an English village has many quirks and appears to be somewhat dimwitted or “fluffy” however, she in fact possesses a sharp logical mind. Although Ms. Marple is not as verbally sharp (in the negative sense) than Agatha Raisin, the reader will enjoy the subtlety of her sense of humor. 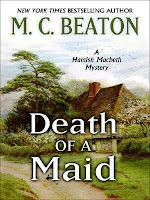 Caroline Graham’s Chief Inspector Barnaby series is similar to Hamish since he appears to be slow moving and yet is extremely perceptive of the smallest of clues. The stories are usually set in the English villages that are under his county jurisdiction. These novels have also been made into a television series named “Midsomer Murders.”

Catherine Aird’s Inspector Sloan series is set against a British backdrop featuring Detective Chief Inspector Sloan and his slow-thinking helper Detective Constable Crosby. The humorous tension in these novels is found between Sloan’s cranky but driven superior, Superintendent Leeyes and himself. Sloan likes to tend to his roses, when he has time, to relieve his stress; reminding the reader of the under achieving Hamish Macbeth.