An earlier post introduced readers to crime solving Parisian Jean-Baptiste Adamsberg. Today I would like for you to meet another Parisian sleuth, namely police detective Capucine Le Tellier, as introduced in 2010 mystery novel The Grave Gourmet.

The Grave Gourmet is written by Alexander Campion, a food critic now living in Toronto, by way of Paris and New York. This series is a humorous and light hearted new entry into the field of culinary mysteries. The just released sequel is Crime Fraiche.

The main appeals in Grave Gourmet are the cast of amusing characters, the beautiful setting of Paris and the mouthwatering descriptions of gourmet foods and restaurants. 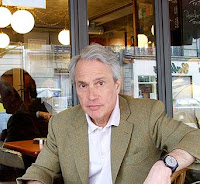 “This new series offers a uniquely blended mix of hooks that will appeal to a wide variety of mystery lovers. The heroine is Capucine LeTellier, an elegant young Parisian police detective. So far she has worked white-collar fraud, but she longs for a more spectacular case. She gets exactly that when the body of an automobile executive is found in the food cooler of a famous French restaurant a fortuitous crime scene, as Capucine’s husband, Alexandre, is a food critic. Despite the bumbling of her team of detectives, Capucine gradually pieces the case together, tracing the crime’s origins to industrial espionage and the CIA.

So we have a culinary mystery set in Paris but blended with a police procedural and a little espionage, all taking place around the inner workings of the French wine and food industry. It really is an appealing combination. While recipes are not included in the text, the dishes sound delicious, and the intrepid cook can visit the author’s Web site for details.“- Booklist