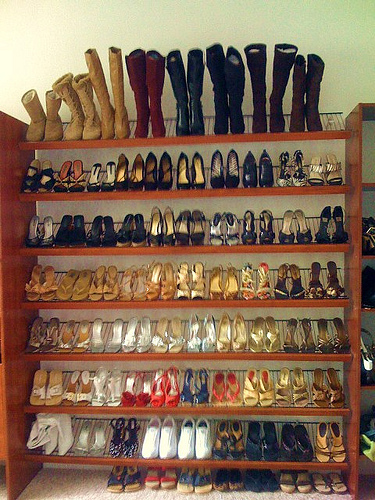 I’m mostly jealous because I can’t seem to keep my shoes organized like that. Makes for fun mornings, with me frantically trying to find two shoes that (a) match, and (b) go with my outfit. Throw in seasonally appropriate and I’m a mess.

Two: ChloécommeParis, Halifax based designers (who I’ve told you about before), were featured in Globe Style this weekend as designers to watch at Toronto Fashion Week. Um…can you say, “awesomesauce”?  It was exciting to open see their name in my copy of the Globe and get to say, “I’ve seen them on the runway!”  I’m looking forward to the day when they are famous and I can say, “Chloé comme Parris? Oh yes, love them. I took awful photos of their clothing at AFW back in 2009.”

man alive, my photography was the pits that night. I’m going to blame the camera.

Three: Intern Anthony and I checked out the Smirnoff Canada party at the Dome. If you ever feel the need to go to the Dome, take Anthony with you.  Anyone who coins the term, “vag wrap”  has the snark needed to be a first class drinking buddy.  But seriously, it was a swinging party by the time we made our exit. We’ll give you a full update in another post.

Four: I was at Titz n’ Glitz on Friday and there were some amazeballs costumes. Seriously. Full on troupe of Lady Gagas. If you were there and want to share your costume photos with the world, talk to us!

Five: I finally got the Iceland photos off of my camera. It only took a week. Sorry, no video of me dancing. That is just too much for me. But! I can show you my super sweet Icelandic sweater:

It’s a sweater by Farmers Market and I’m pretty much hooked on their knitted goods. It’s taking a lot of willpower not to live in this sweater 24/7.  I’ll give you a full update on my thoughts on Iceland and fashion later. (hint: it really does involve a lot of these sweaters).