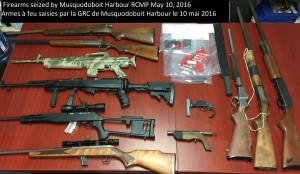 RCMP officers and members of the RCMP Emergency Response Team arrested two men at a residence in Gaetz Brook and searched a home. Several firearms were seized from inside the residence. One of the men threatened a police officer while he was being arrested.

The two men, 37 and 51 years old and both residents of Gaetz Brook, are facing several firearms-related charges. Both are expected in Dartmouth Provincial Court tomorrow.