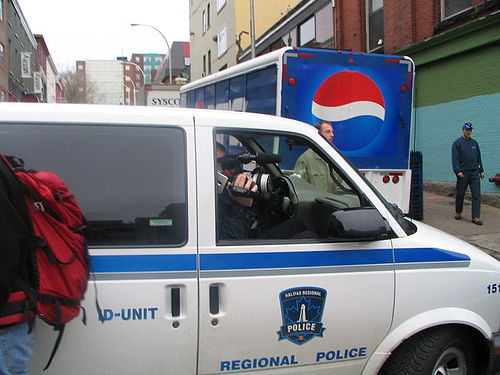 Two men face charges in connection with an early morning break and
enter in Dartmouth.
At 1:14 a.m., police responded to the 0-100 block of Kennedy Drive for
a report of a robbery in progress. Two men, one armed with a hand gun
and the other with a knife, forced their way into the residence. A man
and woman were home at the time and the suspects demanded items from the
man. A shot was fired inside the home, however, no one was hurt. The
woman was able to flee the residence and call police. Members of the
East Quick Response Unit and Patrol arrived very quickly and observed
two men fleeing the residence. Officers arrested both suspects, and a
firearm and a quantity of marijuana was seized.
The man and woman who live in the home were both charged with drug
possession and will appear in court at a later date.  The two
20-year-old suspects are scheduled to appear in court this afternoon to
face to following charges:
Section 348(1)(b) CC – Break and Enter to Commit Robbery
Section 344(1)(a) CC – Robbery with Restricted Firearm
Section 279(2) CC – Unlawful Confinement
Section 86(1) CC – Careless Use of a Firearm
Section 86(2) CC – Unsafe Handling/ contrary to regulations
Section 87 CC – Pointing a Firearm
Section 88 CC – Possession of a Weapon for a Dangerous Purpose (2
counts)
Section 90 CC – Carrying a Concealed Weapon
Section 91(2) CC – Unauthorized Possession of a Prohibited Weapon
Section 92(1) CC – Possession of a Firearm Knowing it is Unauthorized
Section 95 CC – Possession of a Restricted Firearm with Ammunition
Section 96 CC – Possession of a Weapon Obtained by the Commission of an
Offence
Section 244.2(1)(b) CC – Discharging Firearm – Recklessness
Section 5(2) CDSA – Drug possession for the purpose of trafficking
One of the two men faces the following additional charges:
Section 137 YCJA – Breach of Probation (2 counts)
Section 117.01(1) CC – Possession of Weapon while Prohibited (3
counts)
This was not a random incident as investigators believe it is drug
related.
Source: Release