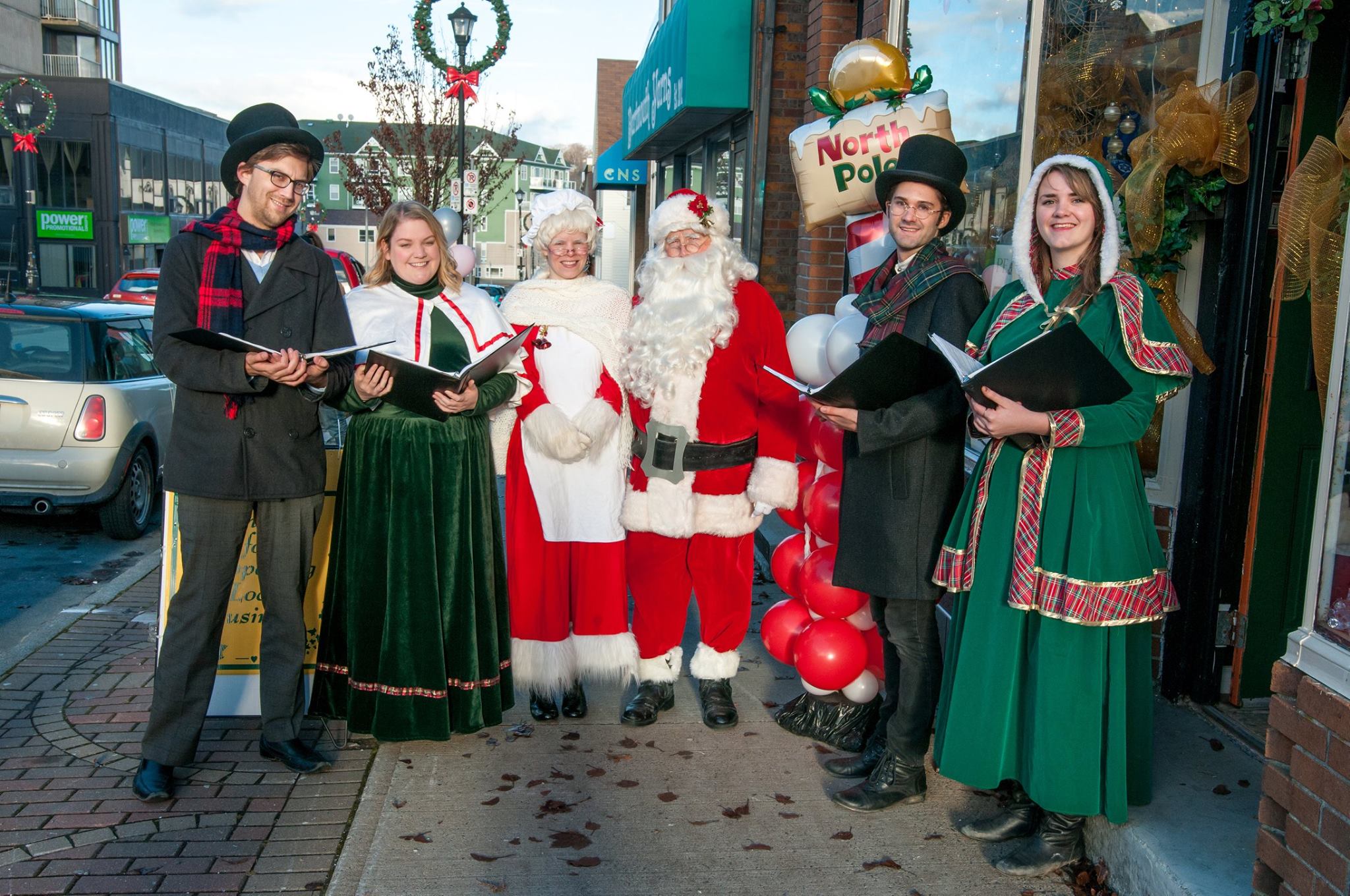 Michael Robson (2nd from the right) making music with the East Coast Carollers in Downtown Dartmouth.

It’s almost Christmas and the Hello Dartmouth team of Stacey Cayea, Frank Orlando and myself have the gift of music for you.

Listen here to A Halifax Carol, lovely seasonal music by local composer Michael Robson, and learn more about its composition below.

What’s your background in music?

MR: Though I’m now starting out as a professional composer with a degree under my belt, it wasn’t always that way. I mainly treated music as a hobby while I was growing up – I became a classical guitarist sort of by accident, and became involved in musical theatre as a teenager (largely with Saints Alive!, which was then based in Dartmouth). I started to get seriously interested in composition after a friend encouraged me to audition for the Nova Scotia Youth Choir, in which I was exposed to a huge diversity of amazing choral music. After that, I started studying theory with Brian Stevens, then-musical director of Saints Alive, and ultimately went on to pursue a Bachelor of Music degree at Dalhousie, where I studied composition with Jérôme Blais. I’ve been actively involved in music ever since, usually composing for the independent theatre community. I also direct (and often write for) the Unconscious Collective, a student-run vocal ensemble based out of King’s College.

How did you decide on a name for the piece?

MR: The piece is called A Halifax Carol – I wanted to come up with a title that could comfortably sit on a program next to really traditional pieces like the Sussex Carol, the Coventry Carol, or the Wexford Carol, while capturing a sense of immediacy and a strong connection to the place where it was written and first performed (more on that below). Perhaps a Dartmouth Carol could be in the works for a later Christmas…

How did you come to write this carol?

MR: The idea for this piece came out of a series of conversations with Kevin Parks and Lynette Wahlstrom, both directors of two excellent church choirs in Halifax and members of the Royal Canadian College of Organists (RCCO). The musical aspect of church services was always very important to me growing up, and I’ve always been intrigued by the idea of composing in that tradition. The Halifax chapter of the RCCO holds an annual carol service in early December, for which they often commission a new work; it turned out that our musical interests seemed to align, so I was very honoured when they offered me the commission!

Where has it been performed?

MR: The piece was premiered on December 1 at the annual RCCO carol service at the Cathedral Church of All Saints. It’s since been performed by the choir at St. Matthew’s United Church in Halifax; also, St. Andrew’s United Church (where I sing) will be performing the piece as part of their Christmas Eve service.

What’s the reaction to it been?

MR: Overwhelmingly positive, actually – it went over really well at the premiere, and the choirs that have picked it up since have spoken quite highly of it.

What will people hear when they listen to it?

MR: Hopefully, a Christmas carol that sounds both traditional and fresh. I deliberately tried to write melodies that were very singable, so that the final piece will seem familiar and immediate.

Anything else you want to share about A Halifax Carol ?

MR: Yes… and this is really important! The text of the piece was written by Thomas McCallum, a brilliant songwriter in his own right, who I met when we both sang with Nova Scotia Youth Choir. Thomas actually wrote the text a few years ago, and it surfaced when I was in the early planning stages for the piece. I wanted to use a text that conveyed the spiritual wonder of the Christmas story while reminding us that it’s actually about very ordinary, down-and-out people, and Thomas’ text fit perfectly. Thomas has previously set this text to his own music, and I’m really grateful to be able to borrow his words.

If you’re interested in performing this piece in a future choir concert or church service, Michael would love to hear from you. Email him at michael.robson.composer@gmail.co

Wishing you the peace and joy of Christmas today, and throughout the New Year.