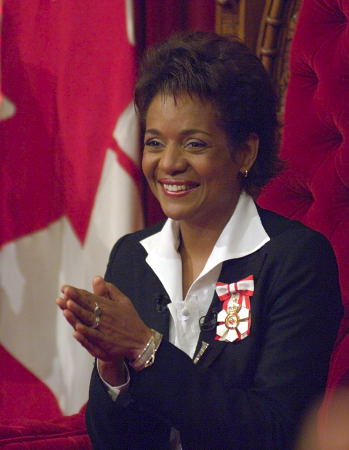 Former Governor-General Michaëlle Jean was in Halifax this week to give the inaugural Alex Fountain Memorial Lecture at the University of King's College. With a strong focus on youth as agents of social change, Jean spoke of her own early beginnings growing up in Haiti during the dictatorship of 'Papa Doc' Duvalier and her family's immigration to Canada as refugees and how she knew she wanted to make an impact on the world from a young age.
Encouraging today's youth to support the cause of solidarity, liberty, equality and fraternity, Jean also took her message to various outreach groups around the city, including Leave Out Violence (L.O.V.E.) and Ark. Haligonia's Ashlee Starratt brings us excerpts from Mme. Jean's lecture at King's as well as her visit on Tuesday with youth at the Khyber Club where she was treated to performances of creative expression from the group. Featured in this video are break-dancers from the Eastern Bloc crew of Concrete Roots.