The Treaty Beneficiary Association of the Mi’kmaw People hosted a press conference followed by a ‘Treaty Teach-in’ at Saint Mary’s University on Monday, March 11th, 2019.

The Association has given a Notice of Eviction to Alton Gas, a proposed natural gas storage project that has threatened to dump tonnes of brine waste into the Sipekne’katik (Shubenacadie) River. Mi’kmaq rights holders have never given permission for Alton Gas to operate in their territory, and have voiced opposition to the project for many years, even occupying their lands at a ceremonial Treaty Camp and Truckhouse adjacent to the proposed brine discharge site. 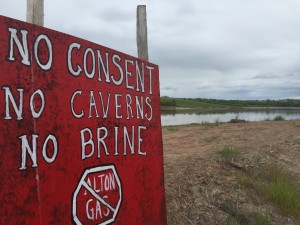 At full operation, Alton Gas would release approximately 10,000m3 of brine into the river every day. As the Treaty Beneficiary Association affirms, “the work this company proposes will further damage the ecological balance of the Sipekne’katik River, threatening species that have lived alongside Us for thousands of years.” 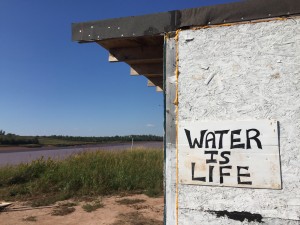 In late February 2019, Alton Gas applied for a court injunction to remove Water Protectors from the Treaty camp. This unwarranted escalation led Mi’kmaq grandmothers and other rights holders to put their foot down. Mi’kmaq GrandmotherElizabeth Marshall describes, “through the years, our resistance has been led by Women of the Mi’kmaq Nation. AsGrandmothers, we are compelled to uphold the Sacred with our intentions for seven generations ahead of us… In this way we regard water as a life force meant to be honoured and protected like any other Life.”

Alton Gas is languishing years behind schedule and has failed to complete their duty to consult with Sipekne’katik First Nation two years after a Supreme Court of Nova Scotia order. The proposed project also lacks key permits and approvals, and, according to frontline Mi’kmaq Water Protector Dale Poulette, this process fails to comply with the terms and conditions of their environmental assessment. Poulette explains that the “Nova Scotia Environment staff are required by law to ensure the condition 2.1(b) was complied with. To knowingly fail to comply with that duty violates the Environment Act and is a breach of trust. On February 22, 2019 Environment and Climate Change Canada issued a Federal Notice of Intent to develop proposed regulations to exempt the salinity discharge plan that a federal compliance team told Alton Gas would violate the Fisheries Act”.

Since we now know Environment Canada has NEVER approved the salinity discharge, will the Minister suspend the Industrial Approval per department protocols until Alton Gas can demonstrate a federally compliant plan? For Mi’kmaq Water Protector and Treaty rights holder Michelle Paul, it is time for the Grandmothers to evict Alton Gas from Mi’kma’ki, so that “the rivers will be saved, the land will be protected, and we will be sustained forever in our lands”.

At the Treaty Teach-in following the press conference, Mi’kmaq knowledge holders including Dorene Bernard, Elizabeth Marshall, and Michelle Paul are offering an opportunity to learn about the Peace and Friendship treaties that govern relations in Mi’kma’ki, and why this is a crucial time for Treaty People to step up to their respective responsibilities. The Treaty Teach-in is organized by the Department of Social Justice and Community Studies, Students Supporting Land and Water Protectors, and the Racialized Students Academic Network at Saint Mary’s University.