Millbrook RCMP is investigating an attempted armed robbery that occurred at a business on James St. early this morning.

At approximately 3:15 a.m. Millbrook RCMP responded to a complaint of an attempted armed robbery at the Treaty Enterprises on James St.

A preliminary investigation has determined that a male entered the business and gestured for money from the clerk. The clerk refused to provide money and stepped away from the secure window. The male then sprayed bear spray into the cash drop window and exited the building. No one was injured in the incident.

The suspect is described as a male with a slim build, approximately 5’9′ and was wearing a black hooded sweatshirt with a white bandana covering his face. The male left on foot and headed towards the Truro area. Immediate patrols by the Colchester District RCMP, Truro Police Service and the RCMP Police Dog Service came up negative.

RCMP are asking anyone who has any information concerning this incident to contact the Millbrook RCMP Detachment at 902-893-6819 or Nova Scotia Crime Stoppers at 1-800-222-TIPS (8477), texting TIP202 + your message to ‘CRIMES’ (274637) or by Secure Web Tips at www.crimestoppers.ns.ca . Calls to Crime Stoppers are not taped or traced and if police make an arrest and lay charges based on a tip, callers qualify for a cash reward from $50 – $2000.

Note to media: A photo of the suspect is attached. 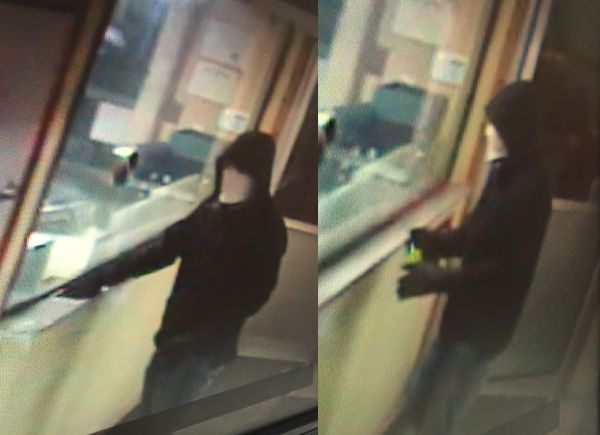