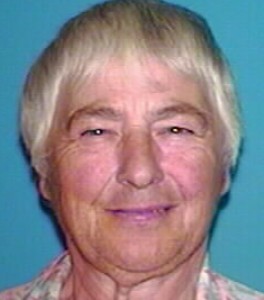 At 9:30 p.m. last evening, Ground Search and Rescue (GSAR) searchers on ATV’s located 81-year-old Myrna Burgess. She was located with the van and transported by EHS to hospital to receive medical attention. She was alert and happy to have been found.

The RCMP would like to thank the multiple GSAR teams and volunteers who were searching for Burgess for over 24 hours. We would also like to thank the public for their assistance and shares and retweets on social media.

Eighty-one-year-old Myrna Burgess has not been seen since May 15 at noon. She and a family member had stayed in their vehicle overnight on May 14 after having car trouble following a visit to Porters Lake Provincial Park. The family member left on foot around noon on May 15 to get help and walked for several hours before meeting some people who tried to help him find his way back to his vehicle. They were not able to locate it, and they contacted the RCMP just before 1:30 a.m. on May 16. The family member, an 83-year-old man, was checked at the hospital and released.

Ground Search and Rescue has been activated, and searchers are being assisted today with an aircraft, given the size of the search area is vast, covering the area from Murchyville Rd. in the Musquodoboit Valley to Porters Lake Provincial Park in Porters Lake.

Myrna Burgess is described as white, with short white hair. She has mobility issues. The vehicle is a 2017 Dodge Caravan, grey in colour with Nova Scotia licence plate BZF 082 attached. The 83-year-old man has told police he spoke to two men on bicycles while he was walking during the day on May 15, These individuals are asked to contact police immediately, to assist them with locating the van.

Anyone who has information about the whereabouts of Myrna Burgess is asked to contact Musquodoboit Harbour RCMP at 902-889-3311.