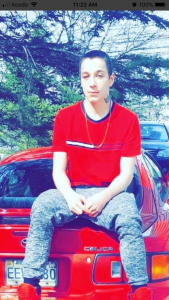 Update : He has been located.

Cody was last seen on June 20th around 430 pm on Herring Cove Rd. Cody is described as a W/M, 15 years of age, 170 lbs, 5’10-5’11, short dark brown hair, a crown tattoo on right side of his neck,. He was last seen wearing faded black jeans, a camo colored button up jacket, red and black Chicago Bulls ball cap, and a red/green/white Gucci belt with a gold Gucci logo for the buckle.

There is no information to suggest that Cody has met with foul play, however, police are concerned for his well being. Officers request that Cody or anyone with information on his whereabouts call Halifax Regional Police at 902-490-5016.