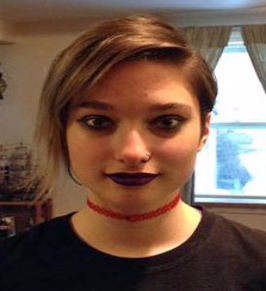 Update: She has been located and is safe.

Seventeen-year-old Angela Marie Hopkinson has not been seen since March 27 betwe­en 10:30 a.m. and 11 a.m. in the area of the 2500 block of Gottingen Street in Halifax.

Angela is described as a white female, approximately 5’7”, 110 lbs with medium length light brown ha­ir that is short on the left side. She was last seen wearing an aqua coloured wi­nter jacket, black jeans, multi-coloured shoes and a black Beatles t-shirt.

There is no informat­ion to suggest that Angela has met with foul play, however, police are concerned for her well-being. Angela has a medical condition for which she receives treat­ment and she has been without this treat­ment since she was last seen. Officers request that Angela or anyone with inform­ation on her whereab­outs calls police at 902-490-5020.