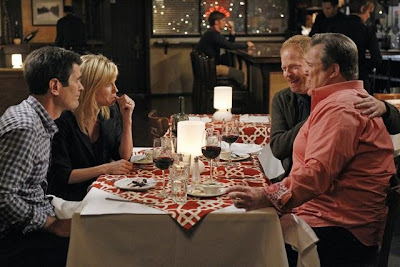 I really liked last night’s episode of Modern Family, and not just because I thought it was funny. (But I did think it was very funny, also.) What I really liked about “Aunt Mommy” was that the entire storyline came from feelings and relationships and desires within the complicated Pritchett-Tucker-Dunphy-Delgado clan, rather than wacky hijinks.I love wacky hijinks as much as the next TV fan, but it’s always nice to watch an episode of a sitcom that can be funny without relying on them.

This episode could have come across as crass, creepy or unrealistic had it not been executed correctly. Instead it struck the perfect balance of sweet and funny.

After Phil sold a house to their friends Steven and Stefan, Phil and Claire took Mitch and Cam out for a celebratory dinner. Emotions were high and the drinks were flowing. Claire was feeling extra maternal after leaving the kids alone for an afternoon and discovering that they didn’t blow up the house. Cam and Mitch were feeling low because not only was the adoption process for their second child taking forever, but shiny, happy Steven and Stefan had just had a kid with a surrogate. They used “the swirl” so that the baby could be biologically either man’s child, and Mitch and Cam were seriously contemplating the option. (I think they’d know the biological father when the baby came out ginger.) The evening got messy, and naturally Phil was the first to cry, telling Mitch and Cam how wonderful it would be if a baby could be the mix of both of them. And then Claire made a regrettable, drunken offer: She would donate an egg, and then the baby would be half Pritchett, half Tucker!

Of course, the next morning Claire was looking like death warmed over and filled with remorse. She was totally skeeved out by the idea and worried about the attachment she’d feel to a baby that was biologically hers, but how could she break that news to Mitch and Cam? Mitch was having the same reservations.

At a ubiquitous family meal at Jay’s house, the news got out and Jay was definitely not on board. But with his disapproval voiced, neither Claire nor Mitch wanted to call it off. They met for a very adorable, very sibling-esque under-the-table chat and discovered neither of them truly wanted this. It was funny, but it was also honest and real.

The baby/no baby plot was the bulk of the episode, but I enjoyed the other stuff as well. Jay will always encourage Manny to expand his universe beyond poetry and fine clothing, even though he can overstep his bounds. But when he hid a few of the pennies Manny and Gloria had been collecting because he knew they didn’t want the project to be over, it was a nice acknowledgement that he understands Gloria and Manny’s close relationship.

Quotes and Moments I Liked: