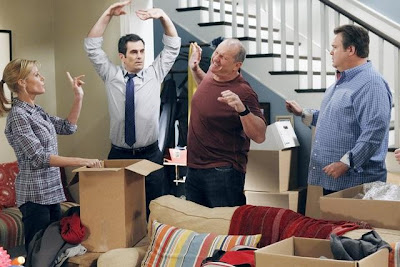 Here’s something strange – right before I went to watch last night’s episode of Modern Family, titled “After the Fire”, I heard a series of loud sirens in my neighborhood and opened my window to smell smoke – there was a big fire a couple blocks away. (From what I hear, no one was hurt.) So watching this episode with the smell of smoke in my apartment? Very weird.

“After the Fire” didn’t actually show any fire – it was about the whole family and neighborhood rallying together after a local family lost everything in a house fire. (Jill’s worst fear alert!)

I liked this episode because it allowed the family members to interact in groups we don’t normally see together, and that almost always brings the comedy. My favorite pairing is Jay and Phil, especially because this time their interactions were taken in a more surprising direction.

Jay hurt his back, and since Phil used to be a licensed massage therapist he offered to lend a hand. Jay was reluctant since Phil always makes a big deal out of stuff like that (loved the reference to the wireless printer, especially the scene they shot while on vacation) and then things really went awry when Jay accidentally let an “I love you” slip. At first it seemed like Phil was making a huge deal out of it – but then it was revealed that he’d actually been freaking out over a text message he received. Two former co-workers who’d caused a ruckus by leaving to start their own firm had asked him to come with them and partner. It was a big risk, and it was nice to see Jay actually give Phil some advice on the matter.

Meanwhile, Claire was freaking out over the idea of Mitchell becoming friends with Gloria and thus turning Gloria into their mom. Really, she just felt left out. I like that Modern Family, which is often rather warm and mushy, doesn’t really shy away from the fact that Claire and Gloria don’t really like each other. They don’t dislike each other, but their personalities are incredibly different. When this happens with friends you just simply drift apart, but with family you love each other anyway. It was interesting to see Claire realize that the mommy issues she thought Mitchell had were the same as the daddy issues she herself has. This storyline wasn’t as funny to me as the rest of them, but I dug Gloria’s honesty and the little moment between Claire and Mitch when they promised to still be on each other’s team.

I thought Haley and Alex were really great this week. They accompanied Cam on a trip to move a large truck. Cam was confident in his ability to drive a large vehicle, but when the chips were down he had some troubles. He interpreted Haley and Alex’s lack of faith in him as stereotyping and were offended, but it turned out it had nothing to do with Cam being gay. It was an interesting concept – Cam, as a middle-aged gay man, still sees stereotyping because that’s what he’s used to. But for Haley and Alex, who’ve grown up knowing so many gay people, it hadn’t even crossed their minds. As someone closer to Haley’s age than Cam’s, I found it poignant.

My favorite moment came when Alex rescued the toy helicopter Manny and Luke had lost from a gang of nerdy bullies. Turns out they’re big Alex Dunphy fans, which led to my favorite line of the night: “You have your fans, I have mine. Someday, your fans are going to work for my fans.” Looks like Alex understands that It Gets Better. It was especially nice to see Haley so shocked at watching Alex work her magic after having criticized her wardrobe all day.

There were lots of hilarious moments and quotes that I’ll list below from “After The Fire”, which I’d describe as a solid, but not spectacular episode. What did y’all think?