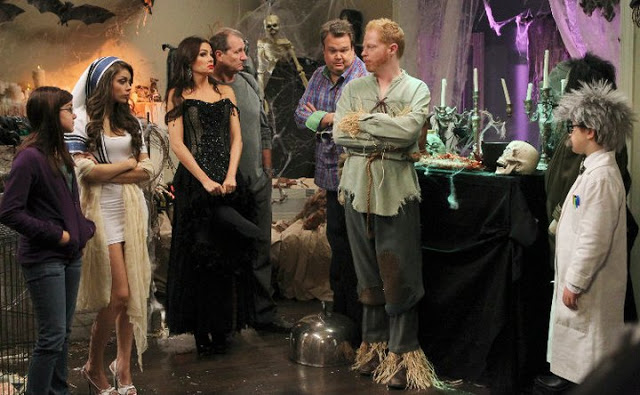 Now this is how you do a Halloween episode. I’ve read some other reviews of Modern Family’s Halloween episode that are less than kind, but personally I thought it was hilarious. I laughed out loud countless times and took a ton of notes on lines that I just had to include in my review.
Claire’s love for Halloween was at the forefront of the episode, but there were still three sub-plots. Phil freaked out about his marriage with Claire after finding out that their neighbors had recently divorced; Gloria’s feelings were hurt when Jay told her that sometimes people can’t understand her because of her accent; and Mitchell faced an embarrassing situation when he arrived at work in a costume to find out that almost no one else dressed up for Halloween.
Halloween Heartbreak 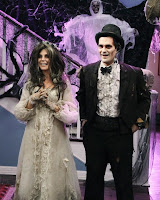 Phil freaking out about his neighbors’ divorce provided  ton of laughs in the episode. Whenever someone divorces, he asks what happened – you know, the way you do when you find out someone died. If the reason is something like drinking, cheating or abuse, he feels safe in his own relationship. After all, he said, “I’m a monogamist social drinker and Claire only sleep hits me.” So finding out that his neighbor had been blindsided by the split sent him into a tailspin. He tried to me more spontaneous and loving, which obviously just freaked out and/or annoyed Claire. Especially because she was busy preparing for her favorite holiday.
Yep, Halloween is Claire’s favorite holiday. After all, Christmas has been taken over by Gloria and her Colombian fireworks (I think fireworks on Christmas sounds awesome) and Thanksgiving has been taken over by the gays and their trendy Food Network recipes like tandoori turkey (I’m not so sure about that one…). So Claire just wanted to do Halloween her way, which was to have everyone dress up and execute a tightly scripted skit for each batch of Trick-or-Treaters. I could empathize with Claire – I love Halloween too. But shouldn’t Manny and Luke have gone Trick-or-Treating themselves? Well, not Manny because he’s 12 going on 40. But Luke is still young enough!

One of the funniest obstacles in the way of Claire’s perfect Halloween was Haley’s slutty costumes. First she was a “scary” black cat, then she put on the nurse costume from when she was 8, then she finally showed up dressed as Mother Theresa…back when she was hot. Awesome. The end of the episode, where the whole family carries out Claire’s wacky plan after she storms out of the house, was very sweet.
Halloween Hurt
Gloria’s accent is such a huge part of why her character is hilarious, so using it as a storyline made perfect sense. Especially since Gloria can be a bit oversensitive at times. When not only Jay, but Manny was correcting her a lot, she started to feel very insecure about herself. She asked Jay to be honest, and he pointed out some of the things she’d been saying wrong – “A doggy dog world” (a dog-eat-dog world), “don’t give me an old tomato” (don’t give me an ultimatum), “blessings in the skys” (blessings in disguise) and “carpool tunnel syndrome” (carpel tunnel syndrome) were a few. Then she really felt bad when she asked Jay’s secretary to order his favorite “baby cheeses” and instead she ended up with a bunch of figurines of baby Jesus.

So Gloria showed up for Claire’s haunted house with the worst fake accent I think I’ve ever heard. Gloria trying to speak with an American accent was even funnier than the way she messes up American phrases with her Colombian accent. When everyone still made fun of her she stormed out of the house (they love doing that in this family) only to be followed by Jay who told her how he’d fallen in love with her in a diner before he even saw her – it was the passion in her voice that got him. “I love the story about the old man,” she said. Haha! He hadn’t said old. Then Gloria punched Mitchell in the face, because he was hidden outside as part of the haunted house, and he startled her. That must have been the cherry on top of his awful day.
Halloween Humiliation
Poor Mitchell. When he overheard two guys at his new law firm talking about their Halloween costume plans, he assumed that this firm wasn’t as conservative as the last one he’d worked at and decided to also arrive in costume. I felt for him – no one wants to be pegged as the spoil sport who doesn’t participate in anything. So he came to work in a Spiderman suit. And then he found out that those two guys were the office douches, and were the only ones dressed up. Ouch. 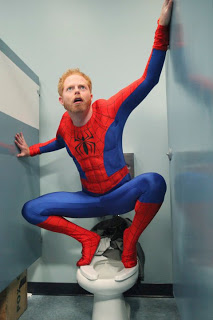 There was an easy solution, though – Cam reminded him that there was a suit in the car, meant for the dry cleaner’s. He put the suit on, but he had to put in on over his costume. The positive side of this was that everyone thought he was ripped. The negative side was that he was very squeaky. He tried to change in the bathroom but things went awry and he ended up channeling his Spidey skills to climb out the bathroom window, only to set off two car alarms in the parking lot and draw the attention of, well, everyone.
So did Mitchell have the worst Halloween ever? Not if Cam had anything to say about it, since apparently Halloween had been “marred” for him many years ago. As Claire pointed out, he simultaneously couldn’t talk about it, but wouldn’t stop talking about it. Finally at Claire’s haunted house, the truth came out – a long, embarrassing story that ended with “I wet my pants!” (in front of the townspeople, no less!). It was funny, but the build-up was better than the pay-off.
Did you like the episode? Before you make up your mind, let me remind you of these hilarious lines and gags: