Last night’s Modern Family, aptly titled “Door to Door”, began as three or four completely separate storylines (and in some ways stayed that way) and unexpectedly resulted in all three families doing exactly the same thing – going door to door, annoying their neighbors.

Let’s start with the weaker storyline – Gloria accidentally lost the family dog Stella, and recruited Cameron to go looking around the neighborhood for her. My favorite thing about this was that what could have been a really predictable joke (the yelling of “Steeellllaaaaaaaaa!”) was funnier because of how well Eric Stonestreet played it. He ended up in an undershirt because it was hot out and suddenly realized how he could take full advantage of the situation. He was so hyper-aware of what he was doing that it was hilarious. 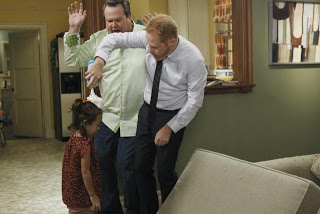 Of course, searching for Stella meant that Cam failed to clean up the huge mess he’d made, even though he’d promised Mitchell he’d do it. I usually love Mitch and Cam’s storylines most of all, but this one fell a little flat for me. Mitch came home and found the mess still there, was angry, and decided to fight off his need to clean the mess right away and wait to let Cam do it. Eventually Cam admitted that, yes, he hates to clean and doesn’t do it because he knows Mitch will. Mitch got back at him by making an even bigger mess, which included spraying whipped cream on Lily’s head and Cam’s shirt. Fun, right? No, because at that very moment the adoption agent showed up for their home visit.

I had a couple problems with this storyline. One was that you could see the home visit thing coming from a mile away, so the comedy was too predictable. I also think the storyline might have worked better had Mitch been the one to forget the date and time of the home visit. But Cam had taken that message, illegibly scrawled on the cover of Vanity Fair magazine. It was Cam’s fault they didn’t know when the adoption agent was coming (why didn’t he just call back to confirm?), it was Cam’s fault the house was a mess, and Cam just ended up coming across as kind of a schmuck.

Meanwhile, the Dunphys had their own storylines that, thankfully, merged by the end of the episode. After Claire almost killed Phil at a dangerous intersection in their neighborhood (now that was hilarious) she decided to campaign for a stop sign. Meanwhile, Luke and Phil were trying to recreate a moment on camera – a basketball had bounced off Phil’s head and into the net, which would have been a sure YouTube hit had it been captured. Of course, it was impossible to recreate. I know Phil’s thing is being a cool dad, but you can only watch a basketball bounce off someone’s head so many times.

To get her stop sign, Claire had to collect 50 signatures from around the neighborhood. With limited time and no help from her family, she didn’t manage to do it. Luckily, Phil had rallied the rest of the Dunphies once he realized his wife needed support and not only did they get the signatures, but they made a hilarious video in support of the stop sign as well. 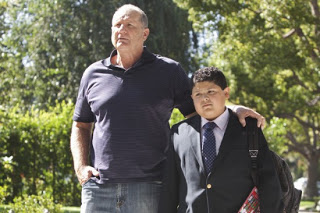 For me, the strongest storyline was Jay and Manny’s. I like when these two are put together, and Manny’s task to sell a bunch of wrapping paper was a great opportunity for comedy. Jay kept trying to pass down little gems of sales wisdom to Manny (You’re selling Christmas, not wrapping paper!) but they couldn’t manage to sell any. In the end Jay agreed to buy it himself, but we learned from Manny that that had been his plan all along. It was simple, but great.

The episode certainly wasn’t my favorite, but Modern Family has set the bar high and no matter what it always makes me laugh. Here are some of my favorite quotes and moments:

And my favorite exchange from the whole episode:
Haley: “Mom just said she was Blind Side.”
Phil: “She’s mistaken, Blind Side was the black kid who played tight end.”
Alex: “Offensive line.”
Phil: “Sorry, African-American kid.”