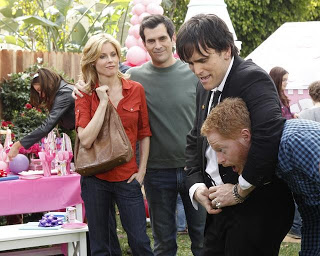 You know it’s been an extra funny episode of Modern Family when I’ve scribbled down two pages of notes for hilarious lines I want to mention in my recap. The return of both Fizbo the clown and Claire and Mitchell’s mom DeDe had be laughing out loud all the way through the episode.

First, DeDe brought Claire’s high school boyfriend along for a family dinner. Sounds weird, right? It was. Not only did she fail to tell Robbie (played by Matt Dillon) that Claire was now happily married with three kids, but she spent the night reminiscing with him about his and Claire’s rebellious teenage escapades.

Just when you thought it couldn’t get any worse, Phil and Claire caught DeDe making out with Robbie outside after dinner. 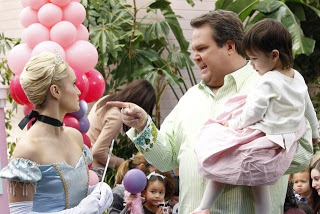 Meanwhile, Micth and Cam were disagreeing over whether Cam should attend Lily’s princess themed birthday party as Fizbo the clown. Cam tried to re-imagine the character as a court jester with a cockney accent, but Mitch didn’t budge.

Everything culminated at Lily’s party which was, of course, a little bit of a train wreck. Gloria was a mess, since she’d been so nervous about once again facing DeDe she’d decided to take her first Xanax…with a chaser of tequila. Cam was still smarting from Fizbo’s rejection and took it out on the poor princess Mitch had hired, and Claire was furious after realizing her mom had done more than kiss Robbie the previous night.

I like that DeDe is such an unlikable character, because Modern Family is in general a very warm show. Misunderstandings get worked out, people love each other, there’s no real villain. And then DeDe shows up, and you see that she has boatloads of the little bit of crazy that make Mitch and Claire so likable. 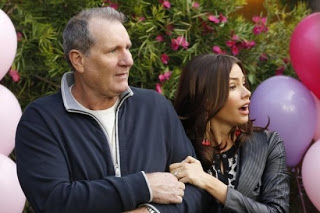 The best part of the episode was that even though Claire, Mitch and Jay each thought DeDe’s ridiculous behavior was about themselves, the plot took an unexpected return to DeDe’s original grudge against Gloria. I had no idea she was going to tackle Gloria again, and hearing Phil scream “I’ve got Gloria! I’ve got Gloria!” from across the yard was just brilliant.

Now, let’s review some of the funniest lines and moments from the episode. There were so many!