Home / Life / Couchtime With Jill / Modern Family: “You owe me a murder” 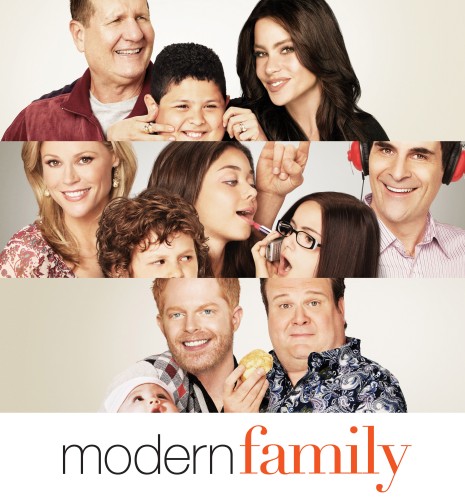 Modern Family: “You owe me a murder” 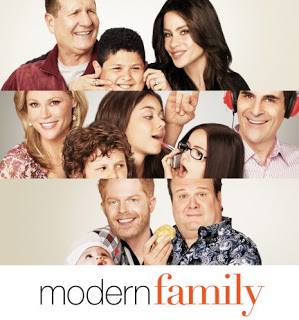 Is Phil Dunphy funny? Some people on The Internets argue that Claire is wrong, that Phil has always been hilarious and it just took her an entire season of Modern Family to figure that out. But I disagree. In fact, the reason Phil Dunphy is so funny as a character is because you’re laughing AT him, not WITH him.
Honesty is such a lonely word
Claire was worried that Phil would embarrass himself hosting a real estate dinner because he thought all his bad jokes were killer. “It’s probably my fault because I laugh at all his jokes,” she said. “With my mouth. Not with my eyes.” And then she actually laughed with dead eyes! Anyone who thinks that Julie Bowen is not a good comedic actress was proven wrong in this episode, because she killed it. Sure, her character isn’t as wacky as some of the others. But that doesn’t make her not funny – she’s nailed the exasperated look for when Phil says or does something stupid.
Besides, it’s not like anyone else finds Phil funny (other than Luke, who will apparently laugh at anything) – otherwise Mitchell wouldn’t have agreed to break the news to Phil himself. Mitchell told Claire that Cam had started wearing bicycle shorts to work out, which is bad for obvious reasons. Claire told Mitch about her dilemma with Phil and bam – they had a “Strangers on a Train” agreement. Each one would do the other’s dirty work.

The problem was, Claire sucked it up and pulled the trigger and Mitchell chickened out. Claire told Cam that the bicycle shorts were not working for him – they don’t work for anyone! – and Mitchell told Phil that he’s this generation’s Richard Pryor. But karma’s a bitch, because Cam overheard Mitchell complain on the phone to Claire that his boyfriend was still in the bike shorts, and he retreated to the bathroom in tears. Again.
To make things up to Cam, Mitchell told him to air one of his grievances – and Cam immediately responded that he’d never liked Mitchell’s beard. “Wow,” Mitchell said. “Well you had that bullet in the chamber.” Ha! Totally going to use that line next time someone insults me. Poor Mitchell though, Cam changed his mind and said he loved the beard right when Mitchell shaved part of it off.
Meanwhile, Claire still had to save Phil from embarrassment. So right before he got onstage for his hosting gig, she stole his cue cards and told him he’d just have to play it straight. But “Phil Dunphy is no straight guy!” Instead, Phil killed with his off the cuff material. He knew she stole the cards too, but since he knew she meant well and the night was a success there was nothing to be angry over.
On Wednesdays, we wear pink
There were two subplots this week, and I found one funnier than the other. The first involved Jay, Gloria and Manny attending some sort of party his employees. I found the story confusing. Have we ever been told what Jay does for a living, other than make a lot of money? Are all his employees Latino or just some? Jay was trying to convince Gloria that he knew everyone who worked for him, so he faked knowing people at the party. The best part was when he yelled out “Carlos”, waved at a guy who responded, and then told the camera “I’m lucky only one turned around.” The joke was that Jay had accidentally walked into the wrong party, but Gloria let him continue to make a fool of himself. It could have been funnier, but it seemed like the story got lost among the rest of the material.
The other subplot gave us the best use of Haley and Alex that we’ve seen so far. Alex was trying to impress the cool girl at school, so Haley tried to teach her how to be popular rather than smart. Things were going well. Alex took a phone call but said “Hey MacKenzie. I’m busy, call me back later,” and then sighed “That was hard.” Haley’s response of “If it was easy everyone would be popular” cracked me up. Once Alex started nailing how to play hard to get on her own, Haley squealed with pride…until Alex mentioned homework to Miss Popular. And then panicked and said “It’s not work if you love it!”, and then both girls screamed and dropped the phone. Poor Alex. She’s just not cut out to be one of the plastics. 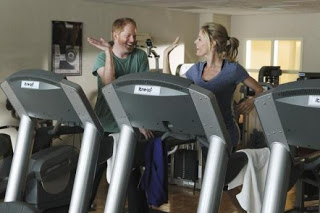 What did you think of “Strangers on a Treadmill”? Would you think Phil was funny if you knew him? Here are some more great lines and moments from the episode: