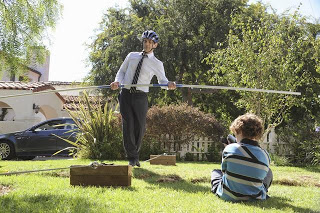 I’m pretty sure I could handle a double serving of Modern Family every Wednesday night – especially since a couple of the new fall comedies I’m watching, like 2 Broke Girls and Up All Night, haven’t quite found their stride yet. (To varying degrees – I still see potential in the latter, not so much the former.) The third episode of Modern Family‘s third season had everything I could have wanted – a hilarious spat between Jay and Gloria, crazy antics from Mitch and Cam, and a really strong Dunphy plot.

Jay and Gloria were having issues with their dog, which Jay had become particularly attached to. Like, he let it come in the shower with him. Gloria was not as big a fan of the dog, and could you blame her? It was eating her shoes! This was a pretty simple storyline, but it was definitely the C Plot and it was good enough for that. I especially liked how Manny’s confusion about the fancy dog cupcake tied in with Mitch and Cam’s storyline, when they showed up starving and accidentally wolfed down a few of the dog delicacies.

Mitch and Cam‘s storyline was very funny this week, I thought. When Cam decided to try a juice cleanse, Mitch thought he’d try something new and support Cam by cleansing along with him. I just thought everything about this played out perfectly, from Cam’s “slow descent into madness” to the fact that the couple had a fundraiser to attend at Mitch’s boss’s house. I loved that Mitch was the one to emotionally lose it when he was told the heartbreaking story of Snorkles the Seal, who died at the hand of a plastic six-pack. The whole fast ended with the two of them frolicking in the waves at the boss’s beach house, as starving people do. It was great.

Meanwhile, over at The Dunphys, Phil was inspired to learn how to tightrope walk after watching Man on Wire with Luke. I love when Phil and Luke have a storyline together, because it’s such an apple-doesn’t-fall-far situation. Add to that the fact that Luke had secretly devoured all the junk food Mitch brought by, and you had one hilarious situation.

When Phil finally did make it all the way across the wire, it was an inspiring moment for all the Dunphys, who’d had sort of a rough day. After Alex was transferred into Haley’s math class, the girls were caught cheating. It turned out they’d made a deal based on Claire’s advice to become “Super-Dunphys” – Alex would feed Haley answers in the second-year math class she was repeating for the third time, and Haley would repay Alex with a week at the popular table during lunch. Obviously not quite what Claire had had in mind for her daughters. Claire couldn’t really talk though, since she’d been pretend-arrested by the bitchy parking lot security guard at the girls’ school. I love these kinds of storylines for Claire – the security guard was being a pain, and I know I wouldn’t have been able to resist a few obnoxious jabs after being issued a ticket either.