You see, he has a rash that has shown up on different parts of his body. He slept horribly last night and woke up with a fever. He refused to nurse.

All these things lead me to believe that my baby is very ill.

According to the doctor, the fever must be because Cameron is teething.

But here’s the thing: I know that Cameron has already sprouted seven teeth without any fever. I don’t see why the eighth (which looks to have already cut through the gum) would suddenly bring on a fever.

And according to the doctor, the rash is probably a reaction to something new he has encountered on this trip.

But I know that almost nothing is different. His soap is the same. His clothes are all washed in the detergent we’ve been using for months. The only thing that is different is the carpeted floor that Cam has been crawling for. But that doesn’t account for the rash behind his knees and his shoulders and under his diaper or the lack of rash on his hands.

It sems too huge coincidence that the rash (a reaction to a new environment) would have nothing to do with the simultaneous fever (brought on by teething). And neither really explain his lack of desire to nurse.

And now this Mommy doesn’t know what to do. Maybe my intincts run a little hot, but I am sure that they are not completely wrong. I know my son and I know what is normal and what isn’t. And I know that he is sick.

So I guess I will just wait and watch him closely. You can be sure I will be running to another doctor if he starts to get worse. 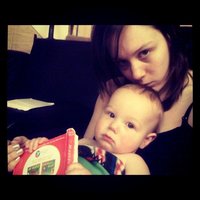 Sick and snuggly first thing in the morning. 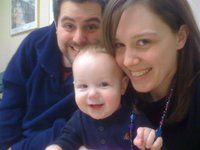 Waiting together for the doctor.

– Posted using BlogPress from my iPhone

Laura (@LauraORourke) lives in Halifax, Nova Scotia. A wife to Dan and a mother to Cameron, she spends her free time blogging, reading, and doing photography. Her blog finds it’s home at http://miraclesofamily.blogspot.com.  You can find find her book reviews here and her photography here.