So back in the day, Council added a bus known as the Manor Bus – #3. The intent was to aid the seniors to be more mobile throughout the peninsular area as the malls and shopping areas began to develop in areas such as Mumford Road and Bayers Road away from the traditional shopping areas such as Downtown Halifax, North End ( Gottingen Street) and Quinpool Road.


Small grocery stores gave way to the big box like Superstores and Sobeys located outside of the traditional shopping areas as well. Other amenities started locating themselves to these untraditional areas as well; doctors, dentists, and government offices such as Access Nova Scotia, Halifax Regional Municipality Storefronts.

Seniors began to use the malls as gathering places to socialize or to exercise by “mall walking” instead of trying to navigate sidewalks in inclement weather. 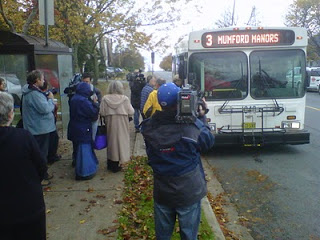 Although the #3 Manor is not busting its seams daily, it does provide a service for which any urbanites understand. Affordable, mass, safe, alternative transportation. It was not designed to be profitable. It was designed to aid the aged and those unable to or do not drive. A public service which is affordable for those on fixed incomes, allows for transportation to the malls and medical offices we as a municipality helped establish, and fosters a good quality of life for our seniors by allowing socialization.

Socialization and independence are required for a good quality of life for our seniors. Otherwise mental and physical consequences may occur. Lack of motivation can cause depression.

“Moderate to severe depression often accompanies physical decline and frailty. As many as 70% of institutionalized elderly experience significant depression, and the incidence in community settings is approximately 18% in the over 65 population (as opposed to 8% in the general population). Some estimates of frail elderly living in independent settings have found a 30% or higher incidence. Depression is a medical condition that affects not only quality of life, but also the way in which people take care of themselves. It is a condition that is usually easily resolved with new treatments, but untreated in the elderly, it can have dire consequences.”

When the affordable housing for seniors was built, they were done so in the traditional areas of the peninsula. Close to all the amenities a resident would require. For example on Gottingen Street, near Sunrise Manor and Ahern Manor; there was a Dominion Grocery Store, shopping destinations like the Metropolitan, and a pharmacy. The only thing remaining is the pharmacy. Will the Province be building new seniors complexes in the near future out by these or the new commercial parks? I highly doubt it. The growth of these commercial complexes was fostered by the municipality for the sake of economic development and to keep Halifax competitive in the Atlantic Region. So it makes sense to have transit accommodating for the residents.


What is the value of this service and the municipality’s desire to repopulate the peninsular area and its need to retain citizens in the urban area? I say it’s priceless and needs to be examined without bias.  Quality of life is at stake here. If every bus route was analyzed on the basis of profit, a substantial amount of routes would be disbanded and the intent of mass transit would be threatened. I think the main issue here is the inability or lack of desire for Metro Transit to rebrand the “manor” bus as a “cross-town” transit service which services seniors, students, residents and commuters.


Rebranding and marketing of this route could make it more popular for those wanting to travel throughout the peninsula without transferring. Case and point: within HRM by Design a similar style bus/ shuttle was not only proposed but RECOMMEND BY COUNCIL, but was shot down by our past Transit Manager.


If Metro Transit and Council are not willing to reconsider this bus route, then I will be requesting that all bus routes be analyzed for their profitability and those who are not making a “profit” be axed as well.

Money Making or Civilization Maker? The Need for the #3 Manor Bus is there
https://haligonia.ca/money-making-or-civilization-maker-the-need-for-the-3-manor-bus-is-there-41364/