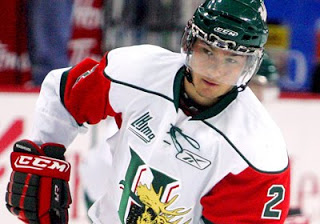 After a tough shootout loss to the PEI Rockets, the Halifax Mooseheads headed south of the border and managed to pull off a vital shootout win over the Lewiston MAINEiacs.

With former MAINEiacs Garrett Clarke and Peter Delmas returning as key players in the Moose line-up, it was only fitting that the two would play a large role in the win.
Clarke had one of his best games of the season picking up a timely goal and two assists but also showing a physical edge the Moose have been missing of late. Although Delmas let in five goals, he turned away 24 shots and stole the win in the shootout. This was his third win in five starts for the Moose.

The Mooseheads managed to get 41 shots on net and should have put the game away early, but a few weak defensive play saw the MAINEiacs score with just 2-seconds left to take the game to overtime.

The win also saw the Mooseheads older players finally picking up the slack as the trio of Gerrad Grant, Tomas Knotek and Travis Randall had six points between them. In the shootout it was again Knotek and Grant who found a way to put the puck in the net and pick up the points for the Moose.

Another positive change was the Mooseheads ability to convert with the man advantage as they managed to score on three of five opportunities.

The Mooseheads continue on the road as they head to Quebec to take on the Quebec Remparts which will be Peter Delmas’ first game since he was traded at the deadline to the Moose.

3rd – Pierre-Olivier Morin (LEW) – Had a goal and an assist, finishing with a plus/minus of +3
2nd – Garrett Clarke (HAL) – Clarke had the last laugh as he picked up a goal and two assists,
1st –Matthew Bissonnette (LEW) – Picked up three assists for the hosts but was stopped as the last shooter

The Moose face Quebec Remparts on Friday and finish their three game road trip with a tilt against the Shawinigan Cataractes on Saturday.

Henry Whitfield is an avid hockey enthusiast who covers all angles of the
Halifax Mooseheads. Follow him on Twitter @HenryWhitfield for live game
updates.