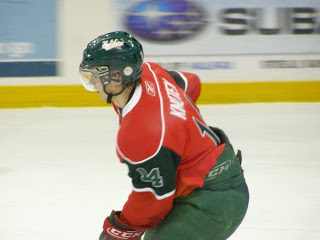 (Photo Credit: Richard Lafortune)
Sea Dogs Edge Mooseheads
Halifax waste chances:drop game to Saint John
Heading into Friday night’s matchup with the Saint John Sea Dogs, no one in Moose Country expected the Halifax Mooseheads to walk away with a win.
The Moose managed to take the Sea Dogs to a shootout but it was business as usual for the number one team in the country as they left with the two points and win number 43 on the season.
The Moose had every chance to take the win but undisciplined play down the stretch and missed chances cost them a big upset in a season that has had so very few highlights.
Rookie Garrett Clarke took some abuse from fans as he picked up a number of minor penalties and was in the box when Michael Kirkpatrick scored to tie the game with just 42.5 seconds left in the game.
Delmas made a few key saves in overtime, as he stopped 31 of 35 shots faced, but had no help in the shootout as both Gerrad Grant and Carl Gelinas missed the net on their attempts.
Announced attendance was 5,676.
The Mooseheads face another tough opponent tomorrow night when provincial rivals Cape Breton are in town.
*Three Star information not made available post-game 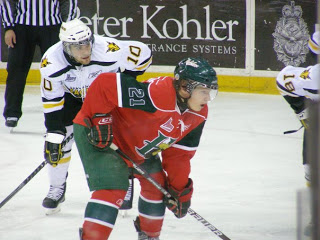 Gabriel Desjardins scored a highlight goal to lead the Moose
(Photo credit:Richard Lafortune)
Mooseheads upset Cape Breton
Delmas shines as Moose knock off provincial rivals
After a tough loss the night before, the Herd came out with a purpose Saturday night and showed glimpses of the bright future ahead in Moose Country.
On the back of another strong outing from veteran goalie Peter Delmas, the young Moosehead squad beat the Cape Breton Screaming Eagles 3 – 2 in front of a rambunctious crowd of 7,202 at the Metro Centre.
Captain Tomas Knotek had one of his best performances of the season as he flashed along the ice all night and looked dangerous on every shift. He opened the scoring in the first period to give the Moose the lead and made a highlight reel play to assist Gerrad Grant’s 19th goal of the season to make it 2 – 1.
Gabriel Desjardins had another strong night and put the Moose up 3-1 early in the third but with just under ten minutes to go Cape Breton scored to put the pressure on. Knotek had a chance to close out the game as he broke in short handed and tried a nifty between the legs shot and was able to beat the goalie but not the post.
Delmas then stole the show down the stretch as he shut the door on a number of scoring chances, finishing the game with 27 saves.
Garrett Clarke rebounded from a number of mistake riddled games to have a solid night and also dropped the gloves, showing the toughness that defined his game earlier on in the season.
Both Bradley MacDonald and Andrew Wigginton were healthy scratches on the evening.
Picking up three out of four points against two of the top teams in the league will make the team happy and give them a boost as they head down the stretch and fight to catch one of the final playoff spots.
Three Stars
3rd – Luke Adam – The team Canada forward showed why he’s so highly touted scoring a big goal for the Screaming Eagles
2nd – Gabriel Desjardins – The speedy winger continues to improve his play and scored another pretty goal
1st – Tomas Knotek – The Moosehead Captain played his best game of the season and finished with a goal and an assist