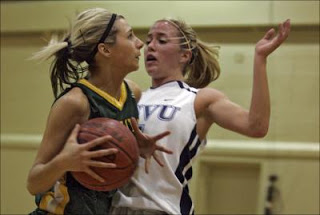 MSVU Women’s Basketball
Saturday night I went out to Mount Saint Vincent University to watch the women’s basketball team play the St.Thomas Tommies. Why? The Mystics were going for their 60th consecutive regular season victory. The Tommies were also undefeated on the season at 10-0, so the game had the makings of great drama. I took a recorder from CKDU along and interviewed Head Coach Dyrick McDermott and a couple of players. The story will air on CKDU on Wed. morning around 9 am (88.1 or ckdu.ca).
The one question I was asking myself as I left the gym after a relatively easy MSVU victory; How is this guy not coaching at the AUS level? I asked him if he applied for any or all of the three openings that came available over the summer at Nova Scotia universities. He said he did, respected the hiring choice of each school, and his only focus now is winning a national championship at the college level with the Mount.
If you see this guy coach, and the way his kids play, it’s absolutely crazy that he is not a fulltime coach at the University level. Not only is he intense, driven, and demanding, but he is a great communicator and has a wealth of basketball knowledge to pass on to his players, who play 40 minutes of intense basketball every single game.
If X, SMU, and Acadia hired better candidates than this guy, they must have hired some pretty incredible basketball coaches.

X Taking Control of AUS Mens Bball
Look who’s back on top of the AUS. After a short absence, the ST FX X-Men are staking thier claim as AUS powerhouse once again. Coach Konchalski’s boys are 10-1, after beating the SMU Huskies by 1 point today in Antigonish.
The X-Men should be undefeated, but a costly mistake vs the Huskies last month at the tower cost them a chance at a perfect season. With the game tied at 70, X’s Alberto Rodriguez had a chance to win the game on a breakaway lay-up with a few seconds left on the clock. Rodriguez missed the layup, then followed SMU’s Mark McLaughlin who had grabbed the rebound. Wrong guy to foul.
Mclaughlin hit two foul shots at the other end and the Huskies stole a W.
The X-Men have not let that bitter defeat slow them down. They now have 30 points at the midway point, 8 points better than Cape Breton and SMU who are tied for second.

Axemen Fading
After losing their Head Coach and some valuable players from last year’s team that made the national final, Acadia was expected to come down this year, but still be a contender. Not too much so far.
The Axemen are 4-9 and tied with MUN for 6th place. Three of Acadia’s 4 wins have come vs re-building UNB (congrats to Coach Brent Baker for beating MUN over the weekend. He’s a great guy, in a difficult spot, trying to turn around a once proud program that has gone dramatically south in recent years). Acadia is 0-7 vs the top 5 teams in the conference.
The biggest problem? Last year’s AUS MVP, Lionel Saintil is out for the rest of the season to back injury. They only had him for 2 conference games at the most. So they’ve now lost 5 of their 6 best players from last year!
Interim head coach Steve Bauer will need for potential rookies of the year, Casey Fox and Justin Boutilier, to step up in hurry!

Joey Haywood
If you haven’t seen Joey Haywood of Saint Mary’s play yet, you’re missing out. The guy was a streetball legend in Vancouver known as “King Handles” before Ross Quackenbush fell upon him (as it seems only Coach Quack can). Now the first year guard is leading the league in scoring with 23 points a game, and maybe the most exciting player in the conference in a long time. To say he’s quick would be an understatement.
Good news for fans, he’s also a hardworking, dedicated student so he may be around for a long time.

Carleton/Ottawa
Just noticed that the Score (ch.55) is showing Ottawa vs Carleton on Wed. night this week. Should be a great one. Asides from the inner city rivalry, Ottawa is ranked #2 in the country, while Carleton is in their familiar spot at #1. I saw Carleton play an exhibition game in September vs. the Kansas Jayhawks (champs) and they were very impressive, losing to KU by 1 point. Last month they beat X by 20 points at the Rod Shoveller tourney.
Should be fun to watch.

Raptors Coming On?
Well the Raptors have won 2 in row after taking care of the horrible Sacramento

Kings today in Toronto. Could the Raptors be gaining momentum heading into their pivotal 4 game stretch in early February, when they’ll face the Magic, Cavs, Lakers, and Hornets?

Before that they’ll play at the Nets, and then back home vs the Milwaukee Bucks, who just lost Michael Redd for the rest of the season. If the Raps can win those 2, that’ll be 4 in a row and it will give them alot of confidence heading into that tough stretch of games, which could determine whether or not they will be sellers or buyers come trading season.
Jermaine O’Neal looked good today with 11 pts and 10 rebs, so hopefully that will further entice Miami to give up Shawn Marion in exchange for JO.

Watching Sacramento struggle to get decent shots today and looking like a shell of the team that was so great just 6 years ago, it made me think of Rick Adelman, and why the Kings ever let him go. Adelman is a great coach, and his teams alway get good looking shots at the basket, regardless of their talent level. Now Adelman is in Houston, and the Kings have a coach in way over his head, who had to step in for Reggie Theus, who was a horrible coach. You would think these small market teams would follow the lead of the Utah Jazz who have held on to Jerry Sloan for 21 years. When you find a great coach who likes being a part of your organization, hold on to him. Why fire him and end up with a coach who is not as good?