Being a mother is 100% the best thing I have ever experienced, but I have to say there are times when I feel like it’s this dichotomy of supreme love and supreme angst/guilt.  It’s back to work time for this Mom and while I knew it would be difficult leaving him to go to day care (of course it would be, that’s a given!) and to go back to work, it completely caught me off guard just how intense the difficulty would be to leave him at day care.  Heart wrenching to say the least.

I’m in finishing up week 2 of day care and week 1 of work and I can honestly say that it’s getting better, but had I written a post last week, I think the tone of it would have been much different.  Last Monday I was an emotional roller coaster.  Kind of like what you feel like when you are grieving something, when one minute you’re fine and the next you burst into tears.  And just the thought of that makes me guilty because I have a healthy and vibrant child and therefore I have the world, so if it hurts this much to put him in day care, in a place where he will most likely thrive after he’s adjusted, I simply cannot imagine or even fathom the thought of having a child who has an illness or worse and I won’t even say it.

See where my mind goes? Isn’t that dramatic?? My child is “just” going to daycare and I’m “just” going back to work and 204829347429348234 other babies and moms (and dads) have done this before me but our first week during this transition just tore me to pieces.  Thankfully it’s getting better every day.

His first day was last Monday and I had a  week to help him transition before going back to work, so we showed up later than he would normally be there and I stuck around a little later and showed up for pick up a little bit early.

I try to be a positive person and I have focused on all of the pros of going back to work. I enjoy working as a professional and using my brain in that way that isn’t a part of my daily life at home as a mom. I enjoy the challenges of my job. I work in the legal field and I have always loved law and I went to school for a long time! It’s nice to know that I have that aspect of my life too.  Cameron will be proud of me for this some day.

Leaving my baby with a stranger in a place he is unfamiliar and hearing him cry and having someone else put him down for a nap in a room full of other babies and knowing that he us only used to my comfort has just about killed me on his first day.

Now that we are coming to the end of week two, while he still clings onto me with all of the might of his little arms not wanting to let go of his Mommy when I take him to day care still kills me, he is having good days there and sleeps well and he’s doing better. Every day that goes by he seems more at ease when I pick him up which helps me relax just a bit.

I was lucky to get a few decent shots of him playing outside at day care last week before I went back to work. Mama needs a photo for her desk, no?

Moms go around with their hearts walking around outside of their bodies apparently and I never realized how vulnerable loving another human being as much as your child can make you feel when they are out of your arms reach being influenced by a part of the world that you aren’t a part of.  It’s like nothing else.

It still bothers me that someone else is getting to see him all day long and watch him learn new things and reports to me how he’s pushing along things and walking behind them while I missed it. But that’s how it is in a dual income family.  Upon this long weekend I will soak up every single second of him. 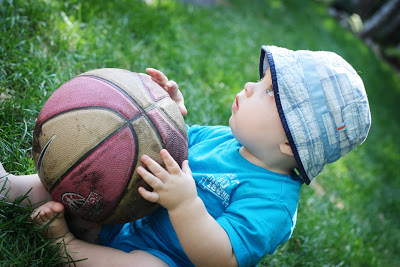