I recently received a lovely email inviting me to participate in a cool new marketing campaign for the Downtown Halifax Business Commission. As opposed to going the route of conventional advertising, the DHBC asked 30 Halifax bloggers to participate in a Big Day Downtown. The rules were simple; each participant was given $100 to spend any way we chose as long as the spots were within the designated downtown boundaries. What a treat! And treat myself, I did. Read on for details as to how I spent my $100, and then watch it all unfold in the video of my Big Day Downtown! 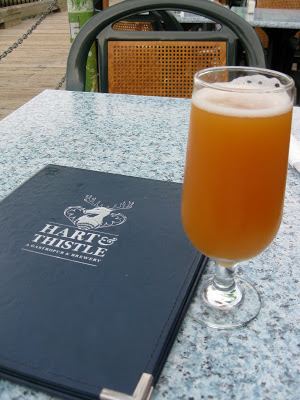 My first stop on my Big Day Downtown was the Hart & Thistle Gastropub & Brewery on Halifax’s waterfront to sample some of their handcrafted beer. At my server’s suggestion, I decided to go with The Hammer, a Hefeweizen-style beer. An unfiltered beer, it was slightly sweet, and took on a fruity, yet creamy character. After drinking that delectable beer on the patio, I went inside to perch at the bar for a bit of Kryptolight IPA– a lighter version of the Kryptonite beer that Greg Nash had brewed the week prior.
Though The Hammer was a fantastic way to start my Big Day Downtown, I was happy to follow it up with the delicious IPA. I often find myself gravitating to this type of beer as it has the constant unmistakable hint of grapefruit. Since we arrived at Happy Hour, I managed to get both pints at $3 each! How can you go wrong on a Tuesday night when Happy Hour starts at
5 pm, and beers are so inexpensive? 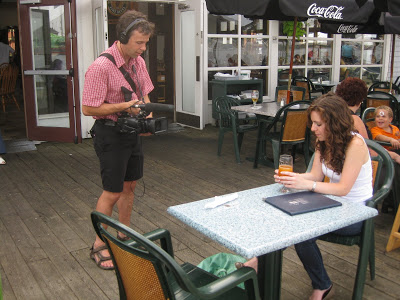 After some liquid courage, I was ready to conquer my fear that was, the oyster. Yes, I’ll admit it, before my Big Day Downtown, I hated those slippery suckers – they gave me the heebee jeebees. However, I’ve never really given them a fair shot. So I thought to myself, “what better way to spend my free money downtown, than to park myself at an oyster bar and have at it?” 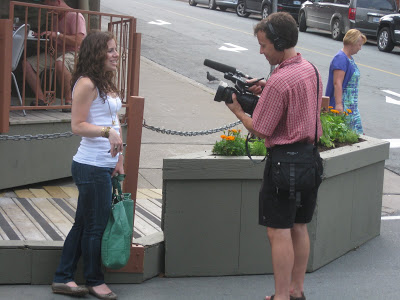 Five Fishermen Grill Manager Shane Robilliard showed me the wine cellar before setting me up at the Oyster bar to sample some of their offerings. As I said, I’ve never been an oyster fan – and I have to admit that they’re still not my fave – but after having the opportunity to sit down and sample 5 different kinds from three Atlantic Canadian provinces, I’ve developed a warm friendship with the bivalves. 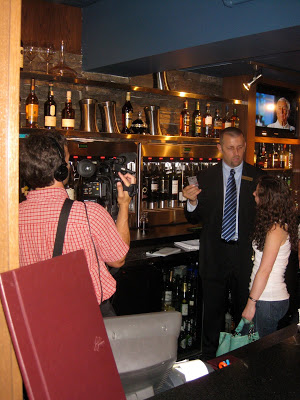 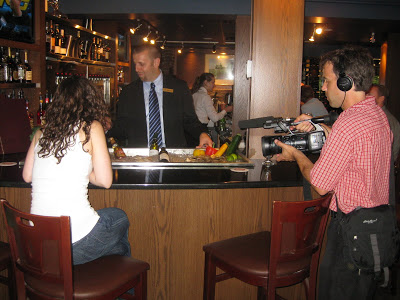 I poured over all of the new restaurant’s menus. The tough choice is obviously going to be deciding what to order – but that’s after I make the difficult decision of choosing dinner or brunch. If you’re a Benny Eggs fan, you should check out 5FG’s 5 different kinds! I’m thinking chorizo and chipotle Hollandaise! 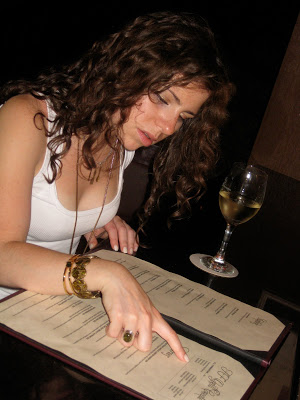 As the ‘hit’ of the new Five Fishermen Grill menu, the ‘Create’ portion allows you to build your perfect plate, choosing a seafood, sauce and side. 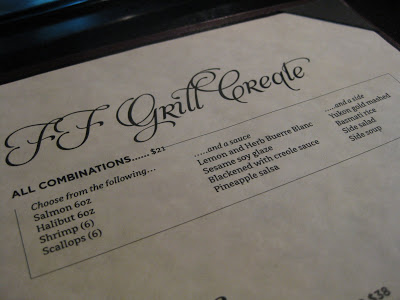 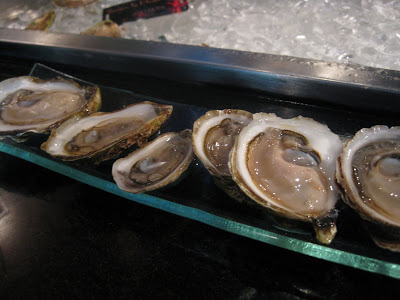 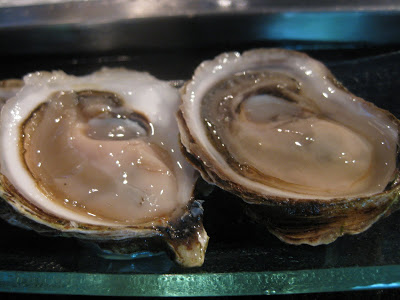 And then it was on to the main event – the cherry on top for me – we headed to
Q Smokehouse & BBQ to check out some sweet, tender, fall-off-the-bone ribs! As I debated over pork or beef, Q’s Manager Peter suggested that I try both. Thanks Pete- good call! 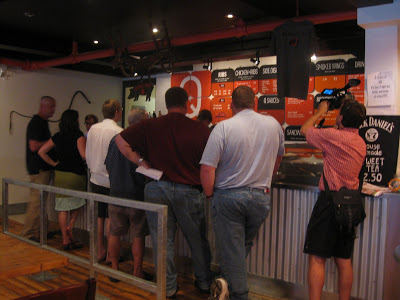 It was hot as Hades up in the smokehouse, so I saw no reason why we shouldn’t sample the libations whilst waiting in line. We tried two of Q’s signature drinks; the Sweet Tea, a lovely blend of tea, simple syrup and lemon, and the Lynchburg Lemonade, a combo of homemade lemonade and Jack Daniel’s Tennessee Whisky. 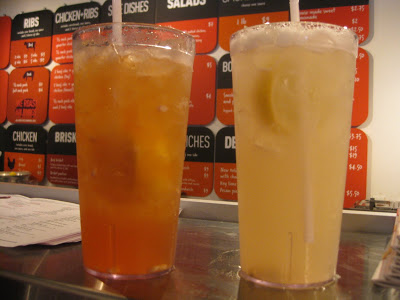 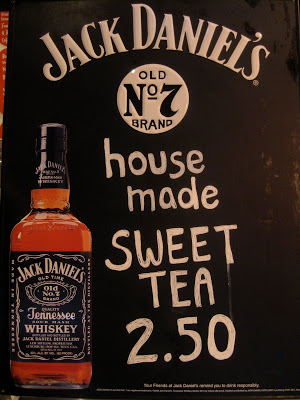 Now, please don’t think I ate this ALL by myself, I did have some assistance! The final tally included: 2 beef ribs and 1/2 rack of pork ribs served with two sides; Mac n’ Cheese and Sweet Potato fries. All of the entrees items at Q are served with a rich and sweet, crumbly cornbread. Sigh…
And you can’t have BBQ without the sauce! Q offers several selections, and I went for the Memphis – a tomato/vinegar mix. I think the sauce was meant for the ribs, but I couldn’t imagine messing with their existing power-house of flavour. Nope, my sauce was better served as a dipper for my crispy sweet potato fries. The Mac n’ Cheese was tasty too – I’m not a huge pasta person – I really just prefer to go for the meat, but I’d recommend trying it. 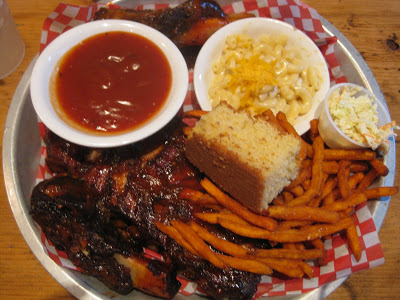 AS IF I could eat anymore after that feed! Just watch me…
I couldn’t possibly finish up my Big Day Downtown without some dessert. A ‘lil something sweet was just the thing to end the day. We headed down to Sugah! on the waterfront to try some of their hand-paddled ice cream. With about 4 ice cream bases, Sugah! offers a selection of about 15 ingredients to mix in. One staff member described it best when she referred to Sugah!’s product as “a homemade Blizzard”. 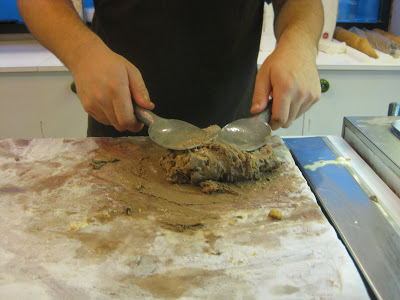 Clearly I went for peanut butter fudge, and clearly, I paired that with chocolate ice cream. 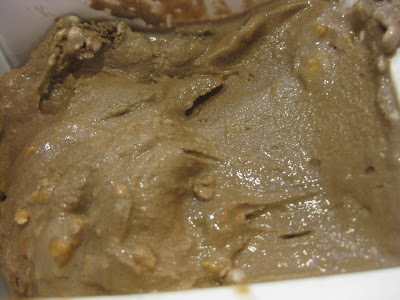 And so ended my Big Day Downtown. Happy Hour on a patio for delicious, locally-brewed beer; Nova Scotian wine paired with a selection of succulent oysters; down-home, rustic yet spectacular BBQ; a rich and creamy ice cream studded with chunks of fudge, and I did it all for $100! I think the moral of the story here kids, is that there are plenty of spots to eat in downtown Halifax on the cheap. Whether you crave salt and crunch, or sweet and creamy, there’s no shortage of restos, bars, coffee shops, etc. that can satisfy it! 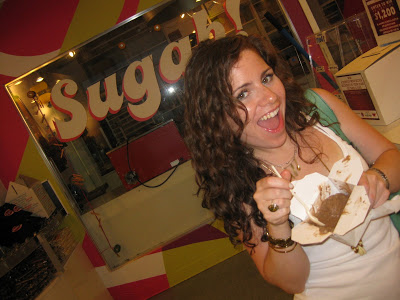 I’d like to thank the folks at the Downtown Halifax Business Commission for involving me in this project. They have taken on the initiative to empower local bloggers to promote the core businesses of Halifax’s downtown area. This idea speaks volumes as it allows readers to get an authentic perspective of life in downtown Halifax as experienced by local resident. Kudos, DHBC!

I’d also like to give big shoutouts to Craig at Spider Video for hanging out with me and doing such a great job on editing the final product. To the restos – many thanks to Melanie at The Hart & Thistle, Shane at Five Fishermen Grill, Peter at Q Smokehouse & BBQ, and the staff at Sugah!
Looking forward to seeing the other 29 bloggers’ posts too! Feel free to leave a link to your blog in the Comments section below!
And without further ado…here is my Big Day Downtown!