Home / Life / The Reader / My Booky Wook by Russell Brand 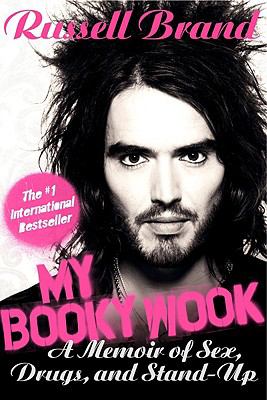 My Booky Wook by Russell Brand

I now know WAY too much about Russell Brand. ( My Booky Wook: a memoir of sex, drugs and stand-up)

I don’t normally read celebrity memoirs, and I really didn’t know who Russell Brand was when I picked up this book. However, since the title made me laugh and my new favourite movie is St. Trinian’s, mood dictated that this was the right book.

Brand came of age in Essex in the 1980’s. His childhood was marked by his parents’ early divorce and a chronic lack of resources. Parental guidance seemed to be a bit lacking with his mother’s recurring illness and his father’s somewhat inappropriate influence. What he did not lack was a family that loved him despite everything. He really did have that soft place to land. Despite his behaviour, which was often hair-raising and icky, his family and friends supported him. Once when the police were chasing him through the neighbourhood, his neighbour says, “Bleepin’ heck [my paraphrase] it’s only Russell.” He dedicates the book to his mother, then implores her not to read it.

Brand craves attention and doesn’t seem to have an off-switch inside to tell him when he has gone too far. He habitually abused drugs,alcohol and sexual activity from about the age of 15 until he learned to live a sober life twenty years later. As a young man he, in addition to the alcohol, drugs and sex, discovered performing as an outlet. He pursued this with single-minded determination. He became very popular in the UK with his sold-out stand-up shows and has won numerous awards for his innovative and boundary pushing projects and performance art. His charm carried him through his tough years.

He is a proud Brit who, up to the time this book was published was not overly well-liked in the US. He made the curious choice to dress up as Osama Bin Laden on September 12, 2001 and was an unpopular host at the MTV video awards. This present edition of his book was carefully annotated to explain his many British references to the American audience. The pop culture references were useful, but I ask you, did we need it explained that a “cupboard” in England is a “closet” in the US?

Overall, Brand is a very good writer with an entertaining command of language and dialogue. His anecdotes flow rapidly, one into the other, with dizzying speed. With a little editorial help, I bet he could write quite good fiction.

Do comedians ever come from a comfortable, well-fed middle class existence? Brand’s book brought to mind Billy by Pamela Stephenson. “Whatever your opinion of Billy Connolly, his life has been an epic tale of controversy and hilarity, tragedy and comedy. From his working class roots in Glasgow he has worked his way to the top, and now enjoys huge worldwide acclaim and lives a dream lifestyle. From welding to folk singing to comedy to writing to acting, Billy has proved beyond doubt his versatility and sheer determination. And if anyone knows that better than him, it’s his wife, Pamela, who will give us an insiders view of this hugely talented musician, singer, tv presenter, comdedian and actor. We will hear about the highs and the lows, the good times and the bad and she will take us behind-the-scenes of the films and tv shows he has been in and the sell-out tours that are so unmissable so that we get to see something of the real Billy Connolly.” ~ publisher

Sometimes, unfortunately, the excessive life does not end well. In The Chris Farley Show: a biography in three acts by Tom Farley Jr. “No one dominated a stage the way Chris Farley did. For him, comedy was not a routine; it was a way of life. He could not enter a room unnoticed or let a conversation go without making someone laugh. Fans knew Chris as Saturday Night Live’s sweaty, swaggering, motivational speaker; as the irresistible Chippendales stripper; and as Tommy Callahan, the underdog hero of Tommy Boy. His family knew him as sensitive and passionate, deeply religious, and devoted to bringing laughter into others’ lives. But Chris did not know moderation, either in his boundless generosity toward friends or in the reckless abandon of his drug and alcohol abuse. For ten years, Chris cycled in and out of rehabilitation centers, constantly fighting his insecurities and his fears. Despite three hard-fought years of sobriety, addiction would ultimately take his life and the tragically young age of thirty-three. Fame on SNL and three straight number-one box office hits gave way to a string of embarrassing public appearances, followed by a fatal overdose in December 1997. Here is Chris Farley as remembered by his family, friends, and colleagues-the true story of a man who lived to make us laugh and died as a result. The Chris Farley Show is an evocative and harrowing portrait of a family trapped by addiction, a father forced to bury a son, and a gifted and kindhearted man ultimately torn apart by the demons inside him.” ~ publisher