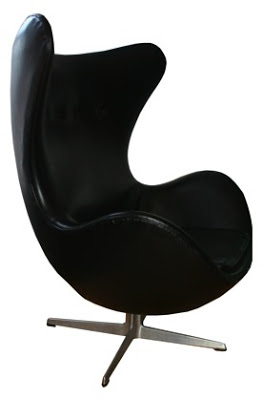 When I moved back to Halifax from BC almost 8 years ago, I was more than a little lacking in the furniture department. Sometime around Thanksgiving, I was having a random chat with my folks about the style of furniture I was thinking about buying. To describe the Egg Chair, I said, “…you know…like the ones they used to have in the town library when I was a kid…” That in itself is remarkable, because sometimes I have trouble remembering things that happened two days ago.

Even more remarkable, my Mom tells me that they are STILL in the library. Turns out the small town I grew up in doesn’t boast heavy readers, apparently. The library was built sometime in the mid-60’s and these chairs have been there since it opened.

Thinking nothing more of it, I was incredibly surprised to find this beauty under the Christmas tree with a big red bow on it. Shortly after that discussion with my folks, they happened to be at the library and noticed new chairs. Because it’s a small town, my determined folks tracked down “the old library chairs” before they were thrown out. Climbing through the pile of chairs slated for the dump (yes, there is still a town dump!), my eagle-eyed mom picked out the best one and negotiated a purchase price of $25. She thought that was a bit too much, but knew it would be a great surprise for me, so gave in and my Dad paid.

I was blown away…that they were listening, that they remembered, that they were so thoughtful, and that they put lots of effort into giving me such a fun surprise. That made me love the chair and the story even more. Of course, I already loved my incredible parents.

Through a series of further coincidences, someone who had a chair-obsession was at my place a few months later. Commenting on the chair, she asked if it was an original. “Uh…I don’t know. I doubt it…it came from my hometown library.” She immediately flipped the chair over and after about 3 seconds, pointed out the authenticity label carefully hiding underneath (made in Denmark, 0167, Fritz Hansen).

Holy Cow! (Ok, so maybe those weren’t the exact words.)

“The EGG is a chair designed by Arne Jacobsen, one of Denmark’s most influential 20th century architects and designers, in 1958 for the SAS Ari Terminal and Royal Hotel in Copenhagen. Known for combining modernist ideals with a Nordic love of naturalism, the Egg boasts a strikingly organic shaped upholstered seat on a slender metal base.”

My black–leather original is in as close to perfect condition as you can get. It’s estimated worth is somewhere more than $7,000 the last time I checked. (A pretty healthy return on your investment, Mom & Dad.)

To me, it is absolutely priceless. But it’s got nothing to do with the estimated value. It’s what I would grab if the house was on fire.

Is that so wrong?