Editors of the National Post’s books blog The Afterword expressed dissatisfaction last Fall with the choices of CBC’s Canada Reads. They were all great books, but haven’t they been read already? The longlist was released on December 29th. Yesterday they revealed the shortlist of great Canadian titles sitting quietly on library shelves just waiting to be read.

My White Planet by Mark Anthony Jarman – “Mark Anthony Jarman is one of Canada’s most original and compelling writers of short fiction. is his latest collection of fourteen new many of which have previously won or been short-listed for literary magazine awards. Every sentence reverberates with subtle meaning and every reading of a Jarman story brings out ever deeper layers of complexity and nuance.”–Back cover.

The Day the Falls Stood Still by Cathy Marie Buchanan – “Steeped in the intriguing history of Niagara Falls during the First World War, this is a transformative love story and an absorbing chronicle. Loosely based on historical events surrounding the life of Niagara’s most famous riverman, William “Red” Hill, this is an epic love story as rich, lush and majestic as the themselves.”- catalogue

Yellowknife by Steve Zipp – “Welcome to the mysterious north. The time is 1998. The millennium looms. Yellowknife, capital of one-third of Canada and home to beasts and bureaucrats, is about to become a player in the world diamond market. People come here for the damnedest reasons. Something to do with the North Pole, maybe. It attracts them, I think. Like, there’s metal fillings in their heads or something. A penniless drifter, a businessman obsessed by bones, an artist with a baseball bat, a fallen academic who lives at the dump, a biologist with a son named after a fungus, a native man older than Canada, a Mountie with a jaw of steel. He dropped several boxes of ammo into his pocket, little plastic containers with sliding lids, the shells lined up like tiny lead soldiers waiting to do their duty. He contained an impulse to throw back his head and howl. Our Lady of the Lake Trout, the Paradox of the Ravens, the Ice Road Cafe, the Mosquito Research Institute. Y2K and the birth of Nunavut. A legend, a myth, a mystery.”–Back cover.

Come Thou Tortoise by Jessica Grant – This is a debut novel of astonishing wisdom and subtle humour from an award – winning young writer. It is a delightfully off-beat story that features an opinionated Winnifred, and an IQ-challenged narrator who find themselves in the middle of a life-changing mystery. – catalogue 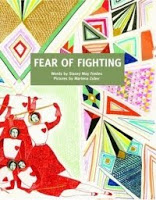 Fear of Fighting by Stacey May Fowles – Fighting searches for meaning in the mundane. Set in the urban landscape of downtown Toronto, the story revolves around Marnie, a broken hearted young woman to find something more.”–Back cover.

Best Laid Plans by Terry Fallis (to be ordered) – “Here’s the set up: A burnt-out politcal aide quits just before an election — but is forced to run a hopeless campaign on the way out. He makes a deal with a crusty old Scot, Angus McLintock — an engineering professor who will do anything, anything, to avoid teaching English to engineers — to let his name stand in the election. No need to campaign, certain to lose, and so on. Then a great scandal blows away his opponent, and to their horror, Angus is elected. He decides to see what good an honest M.P. who doesn’t care about being re-elected can do in Parliament. The results are hilarious — and with chess, a hovercraft, and the love of a good woman thrown in, this very funny book has something for everyone.” – publisher

The Last Shot by Leon Rooke (to be ordered)– “With stories both magical and unexpected, Leon Rooke astounds with his approach to the art of storytelling. From the novella about the surreal adventures of Prissy Thibidault in the deep south watching alligator wrestling while white racists turn into blacks; to stories that include the strange wanderings of a boy called Dark in search of his mother; the escape of a couple of gay friends from their respective relationships for the bright lights of Paris; the negotiations with J.D. Salinger for a bag of his garbage; the torment that six-year-old twins inflict on their blind grandfather while their absent mother gives a boyfriend one last shot at romance; the unemployed man who helps to exterminate mosquitoes pleads his case before a judge about the capriciousness of his life; the painter who ruminates on magic dogs, reluctant models, and living with his ornery old father; the novice writer who hilariously tries to follow a how-to-manual; the survivor of a shut-in family who manages to burrow out of his suffocating lot; to a most unusual bank robbery that saves a woman’s life; here are fictional inventions that dazzle and engage.” – publisher

You and the Pirates by Jocelyne Allen (to be ordered) – “An army of cats joins a crew of boatless pirates to save you from explosions and knife attacks and to stop Up from becoming Down. But before the cats, before the pirates, you are standing outside the metro in rush-hour Tokyo when the building across the street from you explodes. Seconds later, you’re yanked off your feet by a salaryman who plans to use you to change the directions themselves. And you’re not sure if you’re hallucinating, but sometimes your feet are on the ceiling rather than the floor where they should be. Ancient texts, midnight visits from a girl with pink hair and red claws and all your worldly possessions shooting out into the street in a giant fireball eventually drive you to a temple on the Japanese coast where you hope Kannon, the goddess of mercy, can tell you which way is Up.” – publisher.