If you’re a regular reader of the blog, you may know that I occasionally review performances by my local theatre here in Halifax, Nova Scotia. Neptune Theatre is a great local theatre that’s located in the downtown core of Halifax, and I’ve long been a fan. I used to wait out in the cold on “Pay What You Can Night” to see some of the great productions they’ve put on, but in recent years I’ve been luckier. As a blogger, Neptune occasionally offers me tickets to see and review a show! Last December I reviewed The Wizard Of Oz and back in April I reviewed West Side Story. This winter, Neptune’s big holiday production was The Jungle Book. 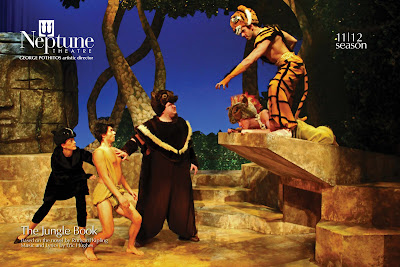 I actually didn’t know much about The Jungle Book – I saw the Disney movie way back when but barely remember anything from it. (Only that Ozzy from Survivor reminds me of Mowgli.) But it’s also a book by Rudyard Kipling. It’s a coming of age story about a baby who is lost in the jungle of India and is raised by wolves. As he gets older he’s shunned by the wolf pack for not being animal enough, but also rejected by the humans for being too animal-like.

I really enjoyed the show, although I didn’t like the story and music as much as I’ve liked past productions Neptune has put on. For me, this was more of a visually spectacular show. The sets were stunning and the costumes detailed and artistic. I loved the use of lights in the show, especially to depict birds interacting with other creatures in the jungle. I usually appreciate singing more than dancing in a show, but it was easy to be impressed by the choreography in The Jungle Book. I loved how each character moved the way their animal would. 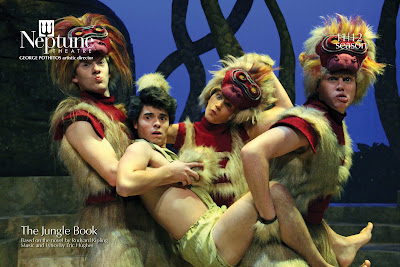 In particular, I’ve got to hand it to Lucas Meeuse who played Mowgli. He was so believable as a kid who’d been raised by wolves, and he had the energy of someone who downed about twelve espressos before going on stage.

More than any other Neptune play I’ve seen before, I think kids would really enjoy The Jungle Book. The music (rapping monkeys included) seemed perfect for theatergoers of younger ages and as I said before, the show was visually dazzling. That means little munchkins won’t be as restless in their seats because they’ll be too busy appreciating all the sights, sounds and colors in front of them. I know I was!