The Canadian Museum for Human Rights (CMHR) today celebrated the launch of Canada’s new $10 banknote, which is covered with imagery that promotes equality and human rights. 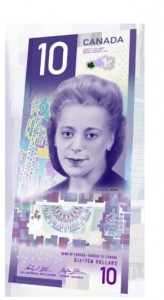 Featuring a dominant portrait of Viola Desmond as the first iconic Canadian woman on a regularly circulating Bank of Canada note, the bill also depicts the CMHR, an eagle feather and an excerpt from the Charter of Rights and Freedoms.
“Canadians will now carry a story about human rights in their pockets,” said CMHR president and CEO John Young. “The circulation of this new banknote represents an incredible opportunity to provoke questions and conversations all across the country about topics like racism and reconciliation and hope for the future.” 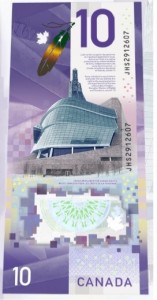 Young joined Bank of Canada Governor Stephen S. Poloz and Desmond’s sister, Wanda Robson, at the CMHR this morning to officially launch the unique, vertically oriented purple bill.
Desmond was selected after an open call for Canadians to nominate a woman to be commemorated on the bank note. Thestory of her courageous action against racial segregation can be found in an exhibit that has been inspiring visitors at the CMHR since it opened in 2014. A Black Nova Scotian business owner, Desmond refused to leave the whites-only section of a theatre until she was arrested and thrown in jail in 1946. Her defiance helped motivate the struggle against racial segregation in Canada.
The CMHR was chosen as a symbol of Canada’s ongoing pursuit of rights and freedoms, set against a backdrop that shows its glowing alabaster ramps, representing a path of light through darkness.
The colour-shifting eagle feather on the bill symbolizes the important, ongoing journey for recognition of Indigenous rights. The Museum presents dozens of stories about the struggle for Indigenous rights in Canada, including the dark legacy of Indian residential schools and the tragedy surrounding missing and murdered Indigenous women and girls.
A limited-edition gift package containing the new $10 bill, with information about Desmond’s contribution and a message from Young will be available in the Museum’s Boutique starting November 20th.
The Canadian Museum for Human Rights is the only museum in the world to explore human rights as an aspiration for all people. Using innovative approaches to storytelling, the Museum creates inspiring encounters with human rights for all ages and abilities, in a visitor experience unlike any other.