Last time I rode a bike, the back tire blew while I was on the waterfront in 1999.  I walked the bike home and gave it away soon after.  No, it wasn’t because of the flat tire, really.  It was because of my fear of riding a bike on our streets.  Non- contiguous bike lanes, sewer grills that were bike unfriendly and the damn hills.

Flash forward to 2010.  I kept thinking I should get a bike for the summer.  Looked at them at stores and realized that bikes were cheap.  I didn’t want to buy one that would fall apart after a few months of use nor did I have the cash to buy the kind I really wanted from the Bike Gallery.  What to do…?

Decided to check out my RBC Rewards points and found out I had enough for a female mountain bike and ordered it immediately.  This sounds hokey… but as I drove around the downtown, I was envious of those pedaling next to me in my Honda.  I wanted the freedom they had!  The website said it would take 4 to 6 weeks.  4 to 6 WEEKS!  I thought, I’ll never get my bike before the poor weather sets in.

I was absoulutely surprised when the bike arrived at 10:30 TODAY! I was so excited!  It was like Christmas!!  I opened the box to find that my new bike was in 4 pieces…  OMG I’m going to have to assemble this thing?!?!  After reading the instructions and gathering all the tools I needed, the adventure began! 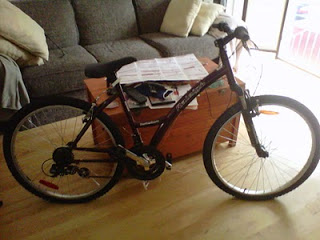 An hour later I was loading the assembled bike into the car to go fill the tires with air.  Back home, I donned my helmet and took off like a rocket (more like a fawlty scud missle)  Few minutes of zipping around and all went well.  Decided to ride over to CBC for an interview.  My first bike adventure!

Since it is a mountain bike, I thought I’d try a little off road drive.  Across the Garrison Grounds to my destination ! it was a little bumpy, but I made it to the interview just in time!

On the way home I tried another route and even drove on the street!  I have a meeting at 6:30 re: the skating oval for the Canada Games and will be cruising over to it on my bike too!  I will be posting more blogs on my bike adventures and the things I think we need to change to make biking better for the citizens of Halifax!
Cheers!