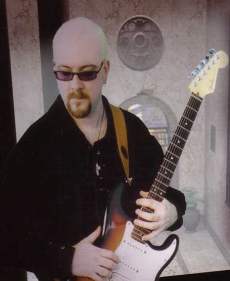 In this entertaining episode of halifamous, Canadian guitarist Warren Robert visits our LIVE broadcast studio to chat to Angela Granchelli about his new album ‘Music From The Void’. He also gives a few tips on slash guitar and plays a couple of tunes.

Heavy Metal/Progressive: In 2005, Canadian guitarist Warren Robert recorded and released an album of experimental shred guitar instrumentals entitled "Thoughts And Realities". It featured melodic tunes, complex textures and orchestrations and fast shred guitar playing. Topping sales charts on Guitar Nine Records, this first solo release earned Warren a reputation as a both a melodic shred guitarist and as a modern composer. Warren has followed up his debut with a new recording for 2009 called Music From The Void. This new concept album is inspired by the writings of the great Samauri Musashi. Warren is also trained in orchestral composition and leads an active career as a composer for film, television and live theatre. He has written the music scores to over 80 international documentaries. Warren has also done a great deal of studio session work on a variety of projects in many musical styles, and still teaches guitar to a handful of keen players. Warren is a student of the martial arts. He has trained in traditional Japanese Ju-Jitsu, and is currently studying Combat Hapkido. He also works with electronics and has recently designed and built several guitar effect pedals and other gadgets. Instrumental Guitar (Electric (Heavy)/Heavy Metal/Progressive), total running time, 46:17 – Warren Robert @ iTunes! Produced by WARREN ROBERT