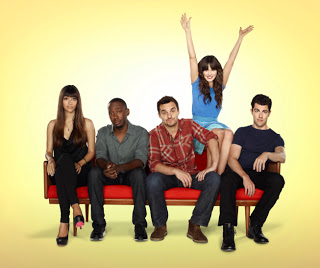 We’re getting there, right? I mean, there were hot and cold moments of New Girl‘s second episode, but overall I still think this show has a lot of potential. More potential than, say, 2 Broke Girls.

Due some unfortunate casting issues (thanks a lot, Happy Endings, which I don’t even watch) Coach was out and a new roommate, Winston, was in. I felt like he didn’t gel quite as well with the group, but hopefully they’ll work that out over the next few episodes.

This episode centered around Jess moving on from her last relationship by getting her stuff back. Of course, that wasn’t just because she needed more clothes (she did) or closure (she did). It was because the guys encouraged her to go get her flat screen TV after she accidentally threw a basketball into theirs. Guys! That’s why you put the big basketball net outside and get a small, Nerf basketball net for the back of a door. Come on. (Note to self – get Nerf basketball set for apartment.)

As you can imagine, since he cheated on her in the first episode, Jess’s ex was a total loser. And he had some kind of magic spell over her. He was a very unexpected wizard. Following her first attempt to regain her possessions, Jess ended up driving him and his new girlfriend to the airport. And made a date to pick the girl up the following week!

In the end, the guys made a nice show of solidarity and helped Jess get all her stuff back – even the T-shirt of hers that he was wearing.

There were a lot of jokes made at Schmidt’s expense this week, but I still like that character. Perhaps it’s because he’s Deputy Leo from Veronica Mars, but I think it’s more than that. He tries to be so cool, but he’s totally not and that’s kind of endearing. He seems like a douche, but the fact that Winston could so easily manipulate him out of the biggest bedroom shows that he’s kind of insecure and gullible.

Overall, I thought the show had a few weak points but still has a ton of potential. Here are some of my favorite quotes and moments from the second episode: